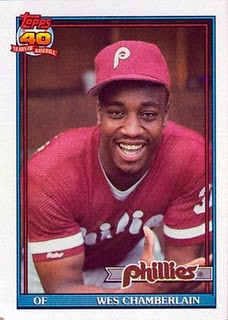 I always like to think about the obscure Phillies, so I went into the media guides from 1990-2000 and listed by year the guy who had the lowest official at bats.

Now there is a really funny story about Louie Meadows (yes I actually remember him). He was signed by the Phils as a free agent in July of 1990. The above baseball card which says Wes Chamberlain is actually the one and only Louie Meadows.Wes was acquired via a trade in August of 1990. It is the 1991 Topps card #603. They were apparently pulling a prank on the Topps photographer and it did not get caught until after the set came out. It was eventually corrected in the 1991 Topps Traded set as seen here.
Posted by BL Chris at 2:33 PM