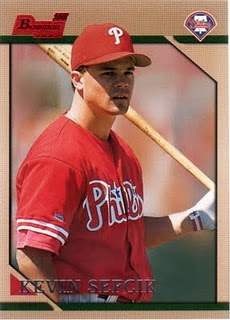 About Kevin Sefcik: There are a variety of reasons for players making it or not making it to the Major Leagues. Talent, physical tools, and work ethic play their role. There's also something to be said for being in the right place at the right time. That last reason could very well apply to a 5'11", 175-pound utility player named Kevin Sefcik. Despite not being selected until the 33rd round of the 1993 Draft, Sefcik made it to the show after just two full seasons in a very barren Phillies farm system. While not possessing a very potent bat or blazing speed, Sefcik was adequate defensively. He managed to spend three full seasons and portions of three others with the Phillies.

Sefcik made his MLB debut on September 8, 1995, taking over for Charlie Hayes at third base in the seventh inning of a 12-3 loss to the Houston Astros at the Vet. He struck out in his only plate appearance that night. Sefcik would appear in just five games in his initial September callup, going hitless in four at-bats. He made it back to the bigs in 1996, hitting a respectable .284 in 44 games, then made the big club out of spring training in 1997. After a slow start, Sefcik was sent to the minors in early May, but returned a month later, and stuck with the Phils through the 2000 season. An infielder by trade, Sefcik learned to play the outfield after the '97 season, and the vast majority of his remaining Phillies tenure was spent backing up the likes of Bobby Abreu, Pat Burrell, Ron Gant, Doug Glanville, and Gregg Jefferies.

Sefcik had his best season in 1998, when he hit .314 in 104 games, and he followed that up by hitting .278 in a career-high 111 games in 1999. Sefcik was far from the most talented player in the world, but it appeared as though he was carving out a niche as a serviceable utility player. Unfortunately, both Sefcik and the Phillies suffered through a poor 2000 season. Expected to be a contender, the team instead was a disaster, going just 65-97. Sefcik didn't fare much better, hitting just .235 in 99 games, and was not offered a contract for the 2001 season. He would sign on with the Colorado Rockies, where he would make his only non-Phillies MLB appearance, a pinch-hit flyout against the San Francisco Giants on June 1. Sefcik was released five days later, then spent the remainder of the '01 season in the Cleveland Indians' system. After spending 2002 in the minors for the Pittsburgh Pirates, Sefcik returned to the Phillies in 2003. He hit .280 in 133 games for the Scranton/Wilkes-Barre Red Barons, but was never called up to the big club in what turned out to be his final professional season.

Personal recollection: Every season, I try to get a feel for who is doing what in the Phillies' farm system. I don't like to be caught saying "Who?" whenever a player is called up. I think Kevin Sefcik is the reason for this. We didn't have as much information readily available in 1995, but Sefcik's name pretty much came out of nowhere. Looking at some of his numbers, I came to realize that I witnessed half of Sefcik's six career home runs in person. I also remember a near-miss against the Red Sox at the Vet in 2000, when a would-be grand slam off Tim Wakefield landed inches foul. Two of the homers I didn't see in person were the ones he hit on September 8, 1998 in a 16-4 pounding of the Mets. The Phillies hit seven homers that night, a franchise record that has withstood the challenges of the powerful teams of the current era. I also remember a pretty violent home plate collision where he plowed into Mike Piazza during the 2000 home opener against the Mets. Piazza held on to the ball, but the Phillies did end up winning the game.

If the Phillies had a more abundant farm system in the 90s, Kevin Sefcik may have never been a Major Leaguer, as his talent was considered marginal at best. Among some people, he seems to be one of the poster children for a futile era of Philadelphia Phillies baseball, much like Steve Jeltz a decade earlier. The fact is, there were many players worse than Sefcik to wear a Phillies uniform during his time with the club, which actually might tell you all you need to know about that era.

So that is my story on Kevin Sefcik. If you have any personal recollections of your own, feel free to share.
Posted by Ricky Jordan Fan Club at 6:56 PM