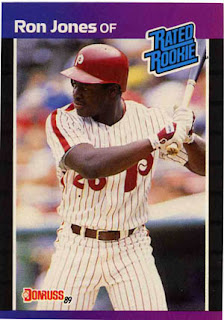 First in an ongoing series. Quick shout out to retrosheet.org for some of the particulars.

About Ron Jones: The history of the Philadelphia Phillies is a long and often tragic one, with countless teams and players suffering their share of misfortune. In the near-quarter century since my obsession with this baseball team began, I'm not sure I've ever seen a more tragic figure than Ron Jones. Signed by the Phillies as an undrafted free agent after the 1984 season, Jones worked his way through the system, and got the call to the big leagues on August 26 of what had long been a lost 1988 season for the club. Jones wasted little time in making an impression, hitting a home run off the Dodgers' Tim Belcher in his second at-bat. Jones would make the most of his '88 callup, hitting .290 with eight homers and 26 RBI in 33 games. Though the Phillies were still quite a ways from being good, it sure seemed like they found their right fielder of the future in the 5'10", 200 pound line drive machine that was Ron Jones. The first dozen games of the 1989 season gave no reason to feel differently, as Jones was again hitting .290 with a couple longballs to boot. Then, disaster struck.

The date was April 18, 1989. In the eighth inning of what would eventually be a 7-1 victory over the Mets at Shea Stadium, Jones made a nice running catch of a deep drive off the bat of Dave Magadan, crashing awkwardly into the then-unpadded (most stadiums did not pad their outfield walls until the early to mid 1990s) right field wall. Jones crumpled down to the warning track, clutching his right knee. The result was a torn patella tendon, ending his season. Such an injury is serious enough today, so you can imagine how crippling it was back then. Jones would rehab the injury, and made it back to the big leagues in May of 1990. The layoff didn't appear to affect Jones's stroke a whole lot over his first 24 games, as he was hitting .276 with three home runs. Once again, disaster would strike.

The date was June 30, 1990. In the seventh inning of what would eventually be a 7-3 loss to the Houston Astros at the Vet, Jones charged in to field a blooper off the bat of Franklin Stubbs. Realizing he would have to play the ball on a hop, Jones slammed on the brakes. This time, his left foot caught in the unforgiving Vet turf, and his knee buckled, shredding the left patella tendon. It didn't take long to realize that the promising career of Ron Jones was basically over. Jones would make it back to the Phillies in 1991, but the damage had been done. He was limited to 28 plate appearances in '91, all as a pinch-hitter, collecting just four hits in 26 official at-bats. Jones was granted his release after the season. He split the 1992 and 1993 seasons between the farm systems of the San Francisco Giants and Atlanta Braves, but never appeared in another Major League game.

After his playing career, Jones spent time coaching youth teams in the Houston area. He was an instructor at the Big League Baseball Academy in Houston, run by his former Phillies teammate Charlie Hayes. Sadly, Ron Jones died of a cerebral hemorrhage on June 4, 2006. He was a week shy of his 42nd birthday.

Personal recollection: I didn't get to see Ron Jones play a whole lot, but I remember being impressed with what I saw. The Phillies had hit the skids in the late 80s, but Jones at least was a guy who provided some hope for the future. I remember the game when Jones suffered his first knee injury, and Harry Kalas kept saying, "Oh, no" as Jones was being taken off the field. Like, we finally have something to look forward to and this happens. I also remember my sister (who is as phanatical a Phillies fan as I am) sent Jones a get-well soon letter, and he sent her an autographed card in return. When he came back from the first knee injury and then went down with the same injury to the opposite knee, you had to feel for the guy.

So that is my story on Ron Jones. For those of you who have your own recollections, feel free to share in the comments. I'll be posting another Random Past Phillie in the near future.
Posted by Ricky Jordan Fan Club at 1:29 PM