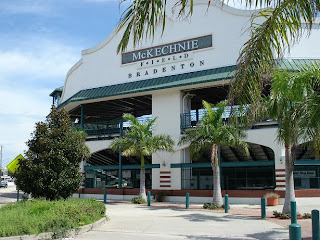 On March 6th the Phillies will travel to Bradenton to battle their home state companions the Pittsburgh Pirates. A few of you older Phillies fans may remember that the Fightins’ actually occupied this space from 1925 to 1927. McKechnie Park has hosted the Pirates since 1969. For a while the Pirates were the only occupant but starting this year the stadium will host a Florida State League team. While I can’t find out much information about what types of beer is served at McKechnie Park rest assured they do sell beer. One thing worth nothing is that the food is said to be of a high quality as it is not provided by a company like Aramark.

This bar has been recently renovated however, renovated doesn’t always mean you’ll appreciate the atmosphere as it is a smoker’s paradise. Although seeing how this is the Sunshine State they have outdoor seating which may help for you non-smokers. If you can get past the smoke you’ll be rewarded with a fine selection of beer. Left Hand, Bell’s, and Shipyard make up for a nice selection in bottles. If smoking is your thing you should check out another featured bar below.

I’m starting to see a trend in the naming of beer stores in Florida. With names like “Big Town”, “House of…”, “World of…” I’m expecting to find a Beerzilla soon. So that brings to another big named beer store called Beer Monster. Big Monster has a vast selection of bottled beer as well as your standard liquors. The layout will make you feel like a kid in a candy store as the aisles are lined with shelves filled with bottles of beer waiting for you to snatch them up. You’ll even be able to procure something from Three Floyds Brewing Co. which is a nice treat as they’re hard to come by in Pennsylvania.

Located right next to Beer Monster is something you might not expect to see across from a Walgreens, a hookah lounge. The Cellar and Hookah Lounge offers patrons the opportunity to sit at the bar smoking fine tobacco through a hookah all while enjoying a beer. You can expect all the same liquids found at the Beer Monster to be served at this bar because they share the same ownership. If you go here on a weekend you can expect a lot of entertainment as the Lounge hosts many musical acts.
Posted by Joey Ballgame at 11:52 AM

Email ThisBlogThis!Share to TwitterShare to FacebookShare to Pinterest
Labels: Joey Ballgame, On the Road Load