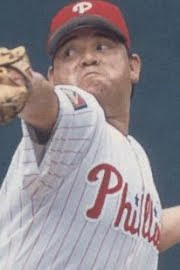 *-listed date of birth, but is widely believed to be older, perhaps significantly so

About Fernando Valenzuela: Surely you've heard of Fernandomania. It swept the nation during the strike-interrupted 1981 season, when a Los Angeles Dodgers rookie phenom lefthander from Mexico with an unorthodox delivery by the name of Fernando Valenzuela took the baseball world by storm. After going 2-0 during a September callup in 1980 (allowing just two unearned runs in 17 relief innings), Valenzuela won his first eight decisions in '81. In fact, the Phillies dealt him his first loss, when he was outdueled by Marty Bystrom, 4-0, on May 18. Valenzuela would end the abbreviated season with a 13-7 record, a 2.48 ERA, 11 complete games, and eight shutouts for the eventual World Champion Dodgers. Valenzuela's individual efforts were enough to bring home both the National League Rookie of the Year and Cy Young Awards. The hefty lefty would remain with the Dodgers through the 1990 season, being selected to six All-Star teams. Along the way, he won 21 games in 1986 and tossed a no-hitter against the St. Louis Cardinals on June 29, 1990.

Though Valenzuela certainly had his moments late in his stint with the Dodgers, his fastball had lost considerable velocity, and his trademark screwball lacked the bite it once had. After a poor spring training in 1991, Valenzuela was released by the Dodgers. After spending time in the Mexican League, Valenzuela signed with the California Angels on May 20, 1991, making his debut with the club on June 7. It proved disastrous, as Valenzuela made just two starts for the Angels, losing both while being lit up to the tune of a 12.15 ERA. After spending the entire 1992 season in Mexico, Valenzuela signed with the Baltimore Orioles during spring training in 1993. Though he lasted the entire season, Valenzuela's return was hardly triumphant, as he went 8-10 with a 4.94 ERA in 32 appearances, 31 of which were starts. It was back to Mexico in 1994, seemingly for good. Then the Phillies came calling.

After reaching the World Series in 1993, the 1994 Phillies were a mess. Injuries had ravaged the club, and many of the players who were healthy came nowhere close to repeating their '93 output. By late June, the pitching staff was in shambles. Desperate for help, the Phillies turned to Fernando Valenzuela. The reaction was understandably negative. Valenzuela was several years removed from being a star MLB pitcher, and nobody was really sure just how old he was. But sure enough, he officially signed with the Phils on June 24, and it was announced he would make his debut with the club four nights later against the Florida Marlins at the Vet. While everyone expected the worst, Valenzuela surprised everyone by allowing just one unearned run over six innings in what turned out to be a 2-1 loss. The lack of run support would be a recurring theme for the veteran southpaw. In eight games (seven starts), Valenzuela had a very respectable 3.00 ERA, not allowing more than three runs in any appearance, but only a 1-2 record to show for it. Valenzuela's final appearance for the Phillies also turned out to the the team's final game of the infamous strike-shortened 1994 season. He was again solid, holding the New York Mets to just a single run in eight innings of work, but the Phils needed 15 innings to come out on top by a 2-1 score.

Though Valenzuela pitched effectively in his brief stint with the Phillies, the club did not bring him back for the 1995 season. Instead, he returned to Southern California, signing with the San Diego Padres on April 5, three days after the strike finally ended. Valenzuela would spend two full seasons in San Diego, and part of a third. He would win 13 games in 1996, helping to lead the Padres to a surprising NL West title. After a disappointing 2-8 start to the 1997 season, Valenzuela was traded for the only time in his career on June 13, going to the St. Louis Cardinals in a six-player deal. After going winless in five starts, Valenzuela was released by the Cardinals on July 15. This ended his MLB career, though Valenzuela did pitch in the Mexican winter league as recently as 2006. Today, Valenzuela provides Spanish-language color commentary for the Dodgers on a part-time basis.

Personal recollection: I remember finding out the Phillies signed Fernando Valenzuela while watching Action News. The internet as we know it hadn't quite entered our lives, and my family didn't have cable until 1997. I remember my jaw dropping upon hearing the news. Gary Papa was doing his best not to burst into laughter or possible tears when breaking the news. They said that Valenzuela was 33 years old, to which my dad (who was 44 at the time) replied: "If he's 33, then so am I!" I wonder if we'll ever find out how old he really is. Fernando, if you're reading this, you can tell me. If you really were born in 1960, then I apologize.

Valenzuela's brief tenure in Philadelphia is largely forgotten, so I think a lot of people just assume he sucked as a Phillie. Obviously, that is not the case. He had a couple decent seasons with the Padres after leaving, and I always wondered if he would've done that well with the Phils. Of course, the team was pretty bad by that point, so I doubt it would've made much difference. Despite not having the greatest physique, Valenzuela is the kind of pitcher that Chris Wheeler would call a "good athlete." He won two Sliver Slugger Awards as well as a Gold Glove.

I happened to attend the only game Valenzuela won in a Phillies uniform. It was on July 17, 1994, a Sunday afternoon game, fittingly against the Dodgers. Valenzuela took a shutout into the ninth inning with a 9-0 lead, getting some run support for a change. He ran out of gas, allowing three runs without retiring a batter, then Paul Quantrill and Larry Andersen came on and proceeded to allow four more runs before Doug Jones got the final out with the go-ahead run at the plate. Just your typical 9-7 victory.

That is my story on Fernando Valenzuela. Feel free to add any personal recollections.
Posted by Ricky Jordan Fan Club at 1:51 PM