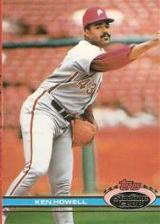 About Ken Howell: When it comes to starting pitchers in Major League Baseball, the term "ace" can often be used very loosely. We think of a true ace as a horse, a pitcher whose mere presence almost guarantees his team a win every fifth day. On the flip side, an ace can also just happen to be the best pitcher on a very weak staff. For the majority of the 1989 and 1990 seasons, Ken Howell fell into this category for the Philadelphia Phillies.

A hard-throwing righty, Howell spent parts of five seasons with the Los Angeles Dodgers, pitching almost exclusively out of the bullpen. On December 4, 1988, Howell was traded to the Baltimore Orioles in a deal that sent Eddie Murray to the Dodgers. Four days later, the O's shipped Howell and minor league pitcher Gordon Dillard two hours north on I-95 in exchange for disgruntled outfielder Phil Bradley. Desperate for quality arms, the Phillies decided to put Howell in the starting rotation. While he wasn't spectacular by any means, Howell was the top pitcher for a 1989 Phillies team that went 67-95. He won 12 games, which was tied with reliever Jeff Parrett for tops on the team, maintaining a 3.44 ERA in 33 appearances, 32 of which were starts. The organization was so impressed with Howell's performance, they signed him to a three-year contract extension prior to the 1990 season. For a while, it looked like it might pay off, as Howell started the '90 season with an 8-3 record, winning six consecutive decisions between May 11 and June 12 of that year. But, as often seemed to be the case in those days, disaster would soon strike.

On June 12, 1990, Ken Howell allowed two runs in eight innings in a 7-2 victory over the Montreal Expos at the Vet. It would be the last victory in Howell's career. He would lose four consecutive decisions, while twice landing on the disabled list with shoulder problems. His final start would come on August 5, getting a no-decision in an 8-6 loss to the Pittsburgh Pirates. Shoulder woes put him on the shelf for the remainder of the season and all of the 1991 season. Howell attempted to come back in 1992, but his right shoulder still hadn't healed, and he missed that season as well. After a last-ditch comeback effort failed in 1993, Howell was released by the Phillies. He would attend Spring Training with the Texas Rangers in 1994, but was released before the season began. Howell would make it back to the big leagues in 2008, as he was named bullpen coach for the Dodgers, a position that he still holds.

So was Ken Howell really an ace? No, not by a longshot. But for a time, he was the best the Phillies had to offer. Which probably tells you all you need to know about life for the Philadelphia Phillies in the late 80s/early 90s.

Personal recollection: If it seems like I'm using the word "ace" a lot in this post, there's a reason for that. The Phillies tried to convince everyone who would listen that Ken Howell was an ace. Times were tough back then. But times like those make you appreciate the current era that much more. Howell did have decent stuff. His control wasn't the best, though. He led the NL with 21 wild pitches in 1989, then threw eight in 18 starts in 1990. I remember watching one of the Phillies' end-of-year Home Companions (they avoided using the term "highlight film" for obvious reasons back then), and Howell was on trial in Roger McDowell's Kangaroo Court. McDowell fined Howell for a recent pitching performance. The total was three dollars, one for each wild pitch.

Another memory I have comes from a doubleheader that I attended. It was late in the long-lost '89 season against the St. Louis Cardinals. The previous night's game had been rained out, and since the Cards were still in the playoff hunt, they had a doubleheader that day. Instead of the regular 1:35 Sunday start, the first game was pushed up to 12:05. Howell was supposed to pitch the first game, but never showed up. Turned out he didn't know that the start was pushed up, and by the time he got to the Vet, the first game was about to start. Don Carman got the start instead, and the Phillies won the game, 9-5 in 12 innings thanks to a walkoff grand slam by John Kruk. Howell started the second game, losing by a score of 2-0.

That's my story on Ken Howell. If you have any recollections of your own, feel free to share.
Posted by Ricky Jordan Fan Club at 10:02 AM