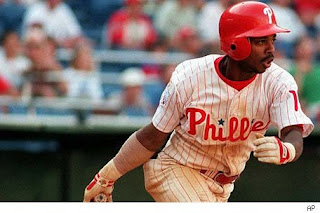 Special thanks to "the late" Joey Ballgame for the suggestion

About Ricky Otero: Of all the players in the long history of the Philadelphia Phillies, few are looked down upon more than Ricky Otero. Of course, the poor guy can't help it, as he stands just 5 feet, 5 inches tall. Selected in the 45th round of the 1990 Draft by the New York Mets, Otero made his way to The Show in 1995, making the Mets' Opening Day roster. He would appear in 37 games over two separate MLB stints that season, hitting just .137 in 51 at-bats. On December 14, 1995, Otero was traded to the Phillies. Going to the Mets was Phil Geisler, an outfielder who in 1993 had won the Paul Owens Award as the top player in the Phillies' farm system, but had since seen his production drop significantly. Geisler would never reach the majors. Otero fared a little better, and after a hot start to the 1996 season at Scranton/Wilkes-Barre, he was called up to the Phillies.

At the time of Otero's recall, the Phillies were hovering around .500, but they would soon find themselves mired in a June swoon that put them in the NL East basement to stay. Back problems had put Lenny Dykstra on the shelf for good, although it would be another two years before he officially retired. On May 28, 1996, Ricky Otero made his Phillies' debut, leading off and playing center field. It looked like a star was born, as Otero went 3-for-5 in a 9-3 rout of the Los Angeles Dodgers at the Vet. Four days later, Otero again went 3-for-5, capping it off with a walkoff single to beat the San Diego Padres, 9-8. Otero's average stayed around .300 for about three weeks, but he soon leveled off, which raised doubts about his durability. Still, Otero managed to hit .273 in 104 games with a team-leading seven triples. Though he possessed excellent speed, Otero wasn't a particularly adept baserunner, as he was caught stealing ten times in 26 attempts. While Otero's 1996 performance was certainly respectable, it was clear the Phillies weren't making any long-term plans for him.

By the time the 1997 season rolled around, Wendell Magee had been anointed as the Center Fielder of the Future for the Phillies. Otero found himself back in the minors, but he would be recalled in early May when it became painfully obvious that the Magee experiment wasn't going to pan out. Otero's impact was far less significant in 1997, as he hit .252 in 50 games, incredibly collecting just three RBI in 151 at-bats, and was unsuccessful on all three steal attempts. He would be sent back to Scranton/Wilkes-Barre in mid-August, never to make another MLB appearance. After two undistinguished seasons in the Baltimore Orioles' system, Otero made his way to the Mexican League, which is where his career and life took a wrong turn.

Otero spent three seasons playing for Cancun in the Mexican League. His numbers were solid, not spectacular there. Good enough to earn a living. But Otero longed for the day he could return to the majors. As the reality set in that it wouldn't happen for him, Otero fell into a deep depression, turning to drugs and alcohol for comfort. Sinking deeper into addiction, Otero not only lost his career, he lost everything. According to an August 30, 2009 article in El Universal, a major newspaper based in Mexico City, Otero was discovered to be homeless, living on the streets of Cancun. Otero called his situation "sad and shameful" and blamed nobody but himself.

Dreams can die hard, and it's not always the easiest thing to deal with when they do. Ricky Otero is a good example of this.

Personal recollection: I think my lasting impression of Ricky Otero is when I went to Photo Night not too long after he was first called up. I was a couple months away from turning 16. Those who know me know that I'm a bit vertically challenged myself, so it was pretty strange seeing a player shorter than I was.

I remember Otero hit a home run against the Cubs at Wrigley Field that was windblown into the basket in right field. I believe Chris Wheeler used the term "cheapie" about 47 times the rest of that game. I also remember Otero slamming his face into the Vet turf diving after a line drive hit by Dax Jones of the Giants. He didn't make the catch. It ended up being an inside-the-park home run, with Otero having to leave the game injured.

I didn't know about Otero's post-career issues until doing research for this post. I haven't seen any updates on his condition since the original article was printed. Hopefully he is able to get rehabilitated and get his life back on track.

So that's my story on Ricky Otero. If you have any thoughts, feel free to post them.
Posted by Ricky Jordan Fan Club at 11:51 AM