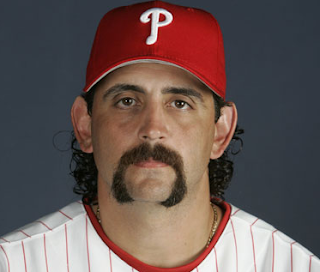 About Sal Fasano: It's odd how some players can become fan favorites. They don't have to have the most talent in the world, or really even play all that much. Sometimes a player comes along and for whatever reason, we can just relate to him. In 2006, Phillies fans found a soulmate in one Salvatore Frank Fasano, a Fu Manchu-sporting journeyman backup catcher who wasn't all that adept at the plate, but was adequate behind it. A group of fans dubbed "Sal's Pals" regularly flocked to the upper regions of Citizens Bank Park donning fake mustaches. Fasano himself occasionally rewarded the group by sending up some free pizzas, a gesture that was not out of character for a man often described as a class act.

Sal Fasano's MLB journey began in Kansas City. After being selected by the Royals in the 37th round of the 1993 Draft, Fasano made it to the show in 1996, spending parts of four seasons in Kansas City, before being sent to the Oakland Athletics for cash considerations prior to the 2000 season. He would be sent back to Kansas City in another cash deal during the 2001 season, and later that same season was traded to the Colorado Rockies. After spending time in the farm systems of the Tampa Bay Devil Rays and Milwaukee Brewers, Fasano was dealt to the Anaheim Angels at the 2002 trade deadline, making two appearances as a September callup for the eventual World Champions. Elbow surgery sidelined Fasano for the 2003 season, and he would spend 2004 in the minors for the New York Yankees. Fasano would have his most productive MLB season in 2005 as a member of the Baltimore Orioles. In 64 games, Fasano hit .250, and 11 of his 40 hits were home runs. Looking for a backup catcher and some pop off the bench, the Phillies came calling, signing Fasano as a free agent on December 1, 2005.

Fasano entered the 2006 season with the Phillies as the backup for Mike Lieberthal, who would be entering the last of his 12 seasons in Philadelphia. While his long hair and mustache had people intrigued from the start, Fasano also made a quick impression on the field. His Phillies' debut was on April 7, 2006, in what would be a 5-3 loss to the Los Angeles Dodgers at Citizens Bank Park. In Fasano's second at-bat with the club, he launched a mammoth two-run homer off Brett Tomko, and the legend was born. Though he was far from a star player, Fasano had his moments, and his humble, blue-collar demeanor made him an easy guy to root for. Unfortunately, as quickly as Fasano came into our lives, he was sent away just as swiftly. A knee injury put Fasano on the disabled list on the Fourth of July. By that time, the emergence of Chris Coste coupled with Carlos Ruiz waiting in the wings made Fasano expendable, and on July 22, he was designated for assignment. Four days later, the Phillies traded Fasano to the Yankees for Hector Made, an infielder who as of this writing is no longer playing professional baseball. In 50 games as a Phillie, Fasano hit .243 with four home runs and ten RBI.

After finishing the 2006 season with the Yankees, Fasano headed north of the border to Toronto, where he spent most of 2007 in the minors for the Blue Jays, making 16 appearances for the big club. Fasano would start the 2008 season in the minors for the Atlanta Braves, but was dealt to the Cleveland Indians for future considerations in mid-June. He would appear in 16 games for the Indians before heading back to Colorado for the 2009 season. Fasano would not make an MLB appearance in what turned out to be his final season as a player. On November 25, 2009, it was announced that Fasano had been named manager of the Lansing Lugnuts, the single-A affiliate of the Blue Jays.

Personal recollection: It is amazing how much a guy who only appeared in 50 games as a Phillie without making a real significant impact on the field can be thought of so highly. Sure, having a name like Sal Fasano screams "South Philly" but everyone loved the guy, this Northeast Philly resident included. He kind of fits into that Jim Thome mold of guys who you wish could've been with the Phils when they won it all. Then there was the Fu Manchu. Take it from a guy who has tried (and in all likelihood failed miserably) to sport that look on many occasions, you just have to respect a guy who can rock a Fu Manchu like that!

So that's my story on Sal Fasano. If you have any recollections of your own, feel free to share.
Posted by Ricky Jordan Fan Club at 11:19 AM