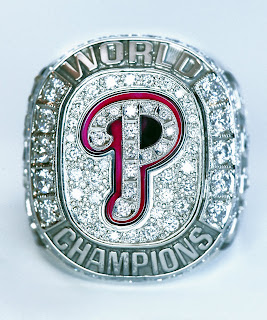 I think we all agree that Ruben Amaro has been very astute and calculated so far on who the Phillies sign, trade, or let go via free agency. The Phillies operations may need to take note and be more selective in who they hire. On August 31, 2009, Phillies Publicity Director, John Blazier felt a rumbling in his stomach and had to go drop a bomb like Saddam in the executive-suite level bathrooms. Blazier apparently felt the need to remove the $10,500 ring and place it somewhere in the stall before he took his big smash and the maroon left it there. This is where the story gets good.

In walks Anthony Mobley, part of the sub-contracted custodial staff to clean the bathroom and happens upon the ring. He took it of course and returned it to John Blazier. Not. He flat out took the ring and would have probably tried to pawn it or sell it for a case of Mad Dog, but bathroom cameras caught Mobley taking the ring and he has recently pleaded guilty. In a review if Mobley's past transgressions, it was uncovered that in the mid 1970s Mobley was found guilty of...MURDER. Now I have two big problems here.

The first: Why the hell is there a camera in a bathroom? To me that seems a bit creepy. That means the Phillies have in their archives me bad loading numerous times in the bathroom after an Adam Eaton gopherball or Bobby Abreu stopping right before the wall on a catchable ball. This is not to mention my yearly upper-decker in stall 2 in the bathroom behind section 233.

The second:What type of background check do the Phillies require of their staff if a convicted murderer was allowed to walk around looting? Does anyone think that this is the first thing Mobley has taken? Is the usher at the end of my aisle a Peeping Tom? Is the Escalator Nazi behind third base a cat burglar? I'll save my complete tirade on this guy for a later date, but at the end of the game he tries to make people walk the ramp because the escalator is too full. I am all boozed up, so I disregard him totally and walk right past. The issue I have is....the escalator's single purpose is to MOVE PEOPLE. Why the hell should I have to walk down 8 flights of a ramp when the escalator is right there and it takes me 2 minutes. This dude is a dick. I am guessing this is the year where him and me get into an altercation.

So what do you think about Mobley and the fact that he was working around your kids? Are bathroom camera's OK with you? The Phillies run a metal detector, checks bags, do a CT scan of me out front (they should actually do a blood alcohol level check), but they let a dreg of society on staff???
Posted by BL Chris at 8:36 AM