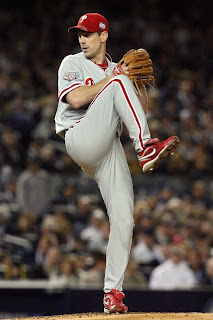 I remember last summer when the rumors were running rampant about how the Phillies were going to get Roy Halladay.  No matter were you went someone was saying whom the Phillies were going to give up to get arguably the best pitcher in baseball. I also remember how disappointed most people were when the Phillies opted to pull the trigger to get Cliff Lee instead. Imagine that disappointed to get the reigning AL Cy Young winner.  Lee went from second best option to a cult hero in just 17 games with the Phillies.  He made the people around Philadelphia forget the name Roy Halladay.
Well, everyone but Ruben Amaro Jr.
As the winter meeting were adjourning, a rumor mill concerning Halladay starting generating another buzz in the city of brotherly love. I remember waking up with morning wood dreaming about the 1-2 punch of Halladay and Lee and thinking about how many wins this team could have with Hamels as a #3.  The same names got bandied about Drabek, Brown, and Taylor as the primaries and then a few other lesser know prospects to fill out the trade. When Halladay came to town to negotiate a new deal so too did the notion this may be a 3 team deal and Clifton Pfifer may be headed elsewhere.  I completely understand Amaro’s logic and not wanting to deplete the farm system.  I’m not saying I agree but it’s understandable.  Amaro has said, "I’m not a dummy. I know what Cliff Lee means to our rotation. Our goal is to be a contender every year. That’s really my job. So, yes, I’d like to have a championship, but not at the cost of having our organization not be good for 10 years. Absolutely not. That’s not the goal. The goal is to be a contender every year.”
And Lee enjoyed his stay here and was shocked by the trade saying, "I thought I was going to spend the rest of my career there. I loved my time there in Philly, but obviously this goes to show this is a business and you never know what's going to happen until you have a full no-trade clause.”
But in all the commotion of the trades there were so many different stories of why Lee was being traded. The main focus was on Lee’s expiring contract and if the Phillies would be able to sign him to a new contract.  There were many people citing a statement Lee made that he would test the free agent market.  This statement, of course, was made while he was still a member of the Cleveland Indians who were not only underachievers but also dumping salaries and trying to revamp the team.
Amaro until recently has refused to give more than standard answers in regards to the trade. Simply saying that it was for the good of the team in the long run and just not the 2010 season. But recent events have given him reason to believe his suspicions were correct. “I heard the stories, but I thought they were just stories,” said Amaro. “The guy weighs 190 pounds and throws like a guy 230. He doesn’t even ice down. That’s not natural.  He’s not natural…if you know what I mean.   Amaro also mentioned Lee’s run in with Chris Snyder this spring. Lee has been suspended for 5 games for throwing at Snyder.  “It’s Spring Training. A lot of the guys I shared he field with have been linked to steroids, but I never seen anyone snap like that”
In response to the allegations Mariners General Manager Jack Zduriencik said. "In the end I don't think we have a whole lot of comment about it. ... There is an appeal process and an opportunity for Cliff to state his case. He will do that and we'll see what happens."
Cliff Lee could not be reached for comment.
Posted by BL Chris at 8:52 AM