Hard to Believe It's Been a Year 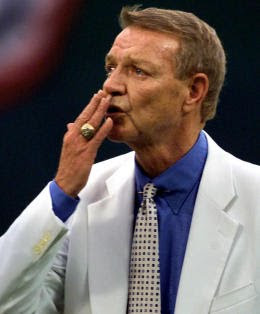 I was fortunate enough to meet Harry Kalas twice in my life. The first time was in 1995, when I advanced to the championship round of the Phillies Home Run Derby, which was held at the Vet. The finals took place before a Sunday afternoon game late in the season. I was in the oldest age group, so we were the last ones to hit. We got to hang out in the Phillies' dugout for four hours, the only rules being no autographs and we couldn't go in the clubhouse. Eventually, the players started filing in. After a while, Harry strolls along with a cup of coffee in his hand, humming a tune. We all kind of gravitated to him, but nobody said anything until yours truly blurted out, "Hey, Harry the K!" Very eloquent, I know, but without missing a beat, Harry (as only he could) responded, "You boys gonna hit the ball loooooooooooooooooooong and faaaaaaaaaaaarrrrrrrrrrr today?" That's the sort of thing you never forget.

My other meeting with Harry was in 2007, at the annual postseason holiday sale at the Majestic Store in Citizens Bank Park. On my way in, I noticed Harry was walking a good bit in front of me. I tried to speed up to hold the door for him, but couldn't quite get there in time. We did eventually make eye contact. Not wanting to miss an opportunity, I said, "Harry the K, my idol! How ya doin'?" To be honest, I'm not even sure what his reply was. It doesn't really matter. It's simply amazing how much of an impact a person you've interacted with for a total of about 30 seconds can have. But then I realize how lucky I am. So many people who never got to meet Harry at all felt the exact same way.

We never thought the day would come that Harry Kalas left us. It truly is hard to believe it's already been a year. As Phillies fans, we must continue to do what Harry would've wanted, and that's to keep cheering on the Phightins. The fact that Harry won't be there to call any more great Phillies moments leaves an infinite amount of sadness. But we can take solace in the fact that through the good times and the bad times, he gave us enough great memories to last a lifetime.
Harry, we remember you every day. On this first anniversary of your passing, I just want to say from the bottom of my heart that we love you, we miss you so much, and we will never, ever forget you. Any time I have a "see through" it will be with you in mind. Have fun with Whitey, keep watching over us and the Phightin' Phils.

Posted by Ricky Jordan Fan Club at 1:21 AM