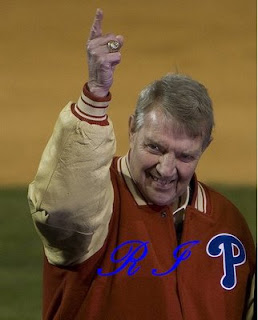 I am sad that Harry is gone, but I am happy I feel like I got to know him. What have I learned in the past year? Well a few things. I do not ever want to hear the song “Bridge Over Troubled Water” or “High Hopes” (unless it is Harry singing it) again. I learned I miss tuning into the TV for the Phils and hear Harry in his familiar velvet voice say “Welcome to beautiful Citizens Bank Park where today your Philadelphia Phillies will take on….” I still have not removed Harry’s last game versus Colorado from my DVR. I cannot tell you how many times in the past year I just turned it on to hear his Matt Stairs HR call. Maybe I am not ready to let go. Maybe I never will be.

I find myself now watching a game and wondering ‘What would Harry say here?’ I probably mimic his voice a couple of times a week. Some are baseball related and sometimes I just will do it in normal conversation. I never met Harry in person. I regret not being able to do that at least once. I did go down to the ballpark alone for his wake and paid my respects, but they were far from final. Harry is baseball to me. More importantly, Harry is the Phillies to me. I often tell that story that the first voice I heard was my Mom’s, the second was my Dad’s, and I am fairly certain Harry’s was the third.

So I think what could I do to honor him? I think it is all of the above. Live and die with the Phillies, enjoy some adult beverages, and be more kind to people. The first two are easy, the last thing is what separates people like Harry from most of the world. So I will leave you with a poem I wrote and an appropriate quote, which some of you will know why I used. Thinking about Harry gives me “a smile on the lip, but a tear in my eye”. Here’s a ‘See-Through’ (Gin and Tonic) to you Harry!

I always knew when the Spring had come
Could not wait to hear his voice
Now the airwaves are empty
And Wheels is my only choice
All I have are memories
Of a man I felt I knew
This spring won’t seem as sunny
The sky won’t be seem that blue
No more Summer nights
Of listening to his calls
“Number 500 for Michael Jack Schmidt!”
Or “Right down the middle for a ball.”
The Fall will seem a bit lonelier
Without Harry at the mic
But we will always have 80 and 08
When he called the last strike
I can still see him in the booth
With his heater and mug of beer
What I wouldn’t give
For just one more “It’s Outta Here!”
Posted by BL Chris at 8:48 AM