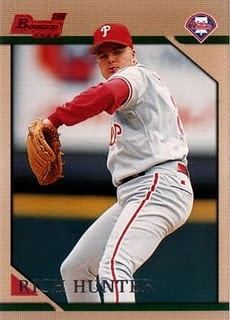 About Rich Hunter: There are various types of prospects when it comes to baseball. Some players are tagged with the "can't-miss" label seemingly from the moment they are drafted. It seems as though we know everything about them before they have even set foot on a Major League Baseball field. Some work their way through the minors and develop into quality big leaguers. Some are unheralded, but catch our eye thanks to one phenomenal season in the minors. That was the case for Rich Hunter, a soft-tossing righty who took the Phillies' farm system by storm in 1995, found himself on the club's Opening Day roster in 1996, out of Major League Baseball in 1997, and out of professional baseball by 2000. It is a cautionary tale of what happens to some players who are rushed to the majors before their time, and can never quite regain the promise that got them there in the first place.

Rich Hunter's pro baseball career didn't exactly get off to a flying start. Selected by the Phillies in the 14th round of the 1993 Draft, Hunter went 0-6 with an astronomical 9.55 ERA at Martinsville of the Rookie League in his first season. He stayed at Martinsville for the 1994 season, where he improved, but was still an unspectacular 3-2 with a 4.50 ERA. In 1995, however, Hunter found an incredible groove. Starting the season at mid-A Piedmont, he went 10-2 with a 2.77 ERA in 15 starts. This earned Hunter a promotion to high-A Clearwater, where he was 6-0 with a 2.93 ERA in nine starts. One more promotion was in store, as Hunter finished the season with AA Reading, winning all three of his starts there to the tune of a 2.05 ERA. Overall, Hunter was a ridiculous 19-2 with a 2.73 ERA. Not overpowering at all, Hunter's big looping curveball kept hitters off balance all season long. For his efforts, he was named one of the winners of the annual Paul Owens Award, given to the top pitcher and position player in the Phillies' system. Hunter had seemingly gone from an unknown to a top prospect in the blink of an eye. But as we all know, as quickly as it can come, it can disappear just as quickly.

By the time the Phillies broke camp in 1996, the pitching staff had already been decimated by injuries. Left with few alternatives, the club made the decision to include the 21-year-old Hunter on the Opening Day roster, despite the fact that he had only made three appearances above class A ball in his professional career. Thrown into the fire, he made his MLB debut on April 6, allowing four runs in 4 and 2/3 innings in what became an 8-4 loss to the Cincinnati Reds. Though it wasn't exactly a dazzling debut, Hunter did manage to strike out seven Cincinnati hitters in his first start, giving many hope that the Phils may have something to build on. Hunter would earn his first career victory on April 13 against the St. Louis Cardinals, and on April 19, he pitched seven shutout innings against those same Cardinals, though he did not factor into the decision. Unfortunately, that was as good as it ever got for Hunter. He quickly found out that Major League Baseball hitters can't be fooled as easily as those in the South Atlantic League. Hitters learned to lay off Hunter's offspeed pitches and sit on his fastball, and teed off. Hunter would be sent to the minors in early May, though he would return in August. The time away didn't really help all that much. In 14 games, all starts, Hunter ended up 3-7 with a 6.49 ERA.

Though the Phillies' pitching situation wasn't much better entering the 1997 season, it was decided that Hunter needed more seasoning and would best be served in the minors. As it turned out, he would never come close to reaching the majors again. He would go 6-11 with a 4.69 ERA at Reading in '97, and was released by the Phillies after the season. Hunter signed on with the Reds in 1998, but found himself out of a job after posting a 1-3 record and 5.97 ERA in seven appearances for AA Chattanooga. He spent the remainder of '98 and 1999 toiling for the independent league Allentown Ambassadors, where his pro career came to an end at the age of 25.

Personal recollection: I remember when Rich Hunter burst on to the scene as far as the Phillies were concerned. Late in the '95 season, it became apparent that the club was going to have to rebuild and look to the future, so they started talking up their prospects a lot more. Scott Rolen was considered the crown jewel, but there was also Rich Hunter, who came out of nowhere to go 19-2. You have to figure he was doing something right, and next thing you know, he's with the big club on Opening Day. He had the potential to keep hitters off balance with a big 12-to-6 curveball and a decent changeup, but it was clear those pitches needed some more time to develop. He simply wasn't anywhere near MLB-ready. You have to commend him for trying. Unfortunately, his experience with the Phillies shattered his confidence, and he never got it back. The Phillies did receive their fair share of criticism for their handling of Hunter. I suppose if they had to do it over again, they would've gone down a different path and let Hunter continue to develop. Of course, it is possible that all Hunter was ever going to be was a one-year wonder. Guess we'll never know for sure.

I only recall seeing Hunter pitch in person once. It was the first game of a doubleheader against the Atlanta Braves at the Vet. Matched up against Greg Maddux, Hunter actually acquitted himself very well, but came out on the short end of a 2-0 score. I figured maybe someday his time would come, but it wasn't to be.

That's my story on Rich Hunter. If you have any recollections of your own, feel free to share.
Posted by Ricky Jordan Fan Club at 9:05 PM