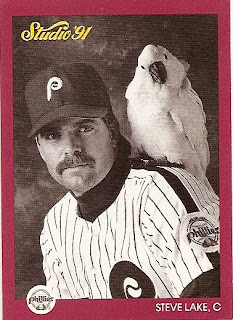 Quick shout out to Tony Dunkelberger for the suggestion!

About Steve Lake: Bob Peffle, my baseball coach at Frankford High School, had a brief pro stint as a shortstop in the farm system of the Houston Astros. He once told me that if he had to do it all over again, he'd want to be a backup catcher. Earn a living by playing once or twice a week. If you're looking for a prototype backup catcher, Steve Lake might just be who you have in mind. Known much more for his skills behind the plate rather than with the bat, Lake never appeared in more than 74 games in any season, but managed to spend a decade as a Major League Baseball player.

Lake's pro baseball career began in 1975, but he would not reach the big leagues until 1983. Lake was a third-round selection of the Baltimore Orioles in the '75 Draft. He would be sold to the Milwaukee Brewers after the 1978 season, and was traded to the Chicago Cubs prior to the 1983 season. Lake would make his MLB debut during that '83 season, appearing in 38 games for the Cubs. He stayed in Chicago until midway through the 1986 season, when he was released and subsequently signed by the St. Louis Cardinals. In 1987, Lake appeared in a career-high 74 games for the eventual National League Champion Cardinals. He saw action in three World Series games for the Cards, who lost the series to the Minnesota Twins in seven games. Lake would spend one more season in St. Louis, and then it was off to Philadelphia.

During the early days of Lee Thomas's stint as General Manager of the Phillies, he seemed intent on stockpiling as many former Cardinals (who had been his previous employer) as possible. One such move occurred on December 16, 1988, when Lake was dealt to the Phillies along with reserve outfielder Curt Ford in exchange for center fielder Milt Thompson. Darren Daulton was to take over for Lance Parrish as the Phillies' starting catcher, and it was hoped Lake would provide the club with a steady backup. The Phillies would finish the 1989 season with a 67-95 record, but Lake was outstanding defensively, throwing out 26 of 53 potential basestealers. He didn't embarrass himself at the plate, either, hitting .252 in 58 games. Injuries limited Lake to just 29 games in 1990, but he was even more adept at gunning down baserunners, as just seven of 18 attempted thefts were successful. Lake's 1991 season wasn't quite as outstanding, as 34 of 51 runners stole successfully on him. Lake signed with the San Francisco Giants for the 1992 season, but he was released late in Spring Training. Not enamored with their catching situation, the Phillies decided to bring Lake back in the fold. The return wasn't exactly triumphant, as Lake battled through a knee injury, appearing in just 20 games. By the time the '92 season was over, it was decided that Todd Pratt was ready to be Daulton's understudy. Lake returned to the Cubs for the 1993 season, which would be his last in the majors. He attended Spring Training with the Cincinnati Reds in 1994, but did not make the club, ending his career. Lake retired having thrown out .4543 percent of potential basestealers, ninth on the all-time list.

Personal Recollection: From time to time on these Random Past Phillie posts, I'll mention the old Phillies Home Companions, which is what they called the team's end-of-season highlight videos in the late 80s and 90s. Since the team often didn't provide a ton of highlights on the field, these videos tended to focus more on the offbeat and behind-the-scenes stuff. One such highlight was Kruk's Korner, a segment hosted by John Kruk that basically focused on gaffes made by fellow players. Once such segment featued Steve Lake being thrown out at third base after a fly ball to shallow left. Kruk asked Lake what he was thinking, to which the lead-footed Lake deadpanned, "I felt fast at that particular moment."

Aside from that, Lake wasn't the kind of player who made a huge impression. Until doing research for this post, I didn't realize how strong Lake was at throwing out runners. Though he didn't have the sample size that an everyday player would have, his percentage is pretty impressive. I guess it's not hard to see why he stuck around for as long as he did.

So that's my story on Steve Lake. If you have any recollections of your own, feel free to share.
Posted by Ricky Jordan Fan Club at 9:00 PM