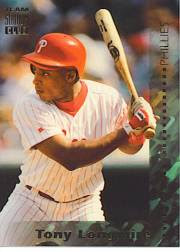 About Tony Longmire: Potential. How often do we hear that word regarding young players? For Phillies fans in the early to mid 1990s, we heard that word a lot in regards to one Tony Longmire. The sweet-swinging lefty was part of a deal that the Phillies were touting as one of the steals of the century. Late in the 1990 season, long after they'd fallen out of contention, Phillies management noticed a clerical error made by the front office of the eventual NL East Champion Pittsburgh Pirates. The error exposed outfield prospects Wes Chamberlain and Julio Peguero to the waiver wire, and the Phils claimed them both. To cover up for this mistake, the two clubs worked out a deal on August 30. Going to Pittsburgh was Carmelo Martinez, a veteran first baseman/outfielder for whom the Phillies had no future plans. The Pirates agreed to throw in a player to be named later. On September 28, it was announced that Longmire, an outfielder who had been selected by Pittsburgh in the eighth round of the 1986 Draft, would be sent to Philadelphia.

After spending the 1991 season in the minors, Longmire came to Spring Training in 1992 with a legitimate chance to claim a spot on the big league bench. Unfortunately, Longmire came down with a severe case of shin splints that would eventually require surgery to relieve the pressure. He would miss the entire season. While Longmire didn't play, he spent the year on the Major League disabled list, thus earning an MLB paycheck, a move that reportedly did not sit well with many of the club's veteran players. Longmire was back in the minors to start the 1993 season, but he would eventually get the call to the big club. It seemed there was never a dull moment with Longmire, and his callup was somewhat controversial. With the August 31 deadline looming for postseason eligibility, the eventual National League Champion Phillies had to decide on the final player to include on the 25-man playoff roster. The choices came down to spot starter/long reliever Mike Williams, switch-hitting outfielder and local product Ruben Amaro, Jr., and Longmire. The Phils went with the potential of the untested Longmire, who would collect three hits in 13 at-bats over the season's final month. Longmire would make one appearance in the postseason, striking out as a pinch-hitter in Game 2 of the NLCS against the Atlanta Braves, a game the Phillies lost by a score of 14-3.

Longmire didn't get much of a chance to show what he could do at the Major League level in 1993, and by the time 1994 came around, he was out of minor league options. Not wanting to risk losing him on waivers, the Phillies included Longmire on the Opening Day roster. Early in the season, Longmire was mostly relegated to pinch-hitting duty, but he got some starts in the outfield later on after a wave of injuries decimated the club. Overall, Longmire hit .237 in 69 games during the infamous strike-shortened '94 season. In 1995, however, Longmire would finally make his mark. In his first at-bat of that season, Longmire hit a pinch-homer off Vicente Palacios of the St. Louis Cardinals, and never looked back. In 59 games, Longmire hit a sizzling .356 with three homers, all of which came as a pinch-hitter. It looked as though Longmire could finally be carving out his MLB niche as a lefty bat off the bench. Once again, however, the injury bug would bite. Longmire went down with a fractured wrist in early August, and would miss the remainder of the '95 season. The pain had not subsided by the time he reported for Spring Training in 1996, and it was announced that Longmire would have to undergo another surgery, which would cost him the entire '96 season. There were some grumblings that Longmire hadn't been diligent enough in his rehab from the initial procedure, and the organization seemed to sour on him. He would return to the Phils for Spring Training in 1997, but was released in late March. Aside from a brief stint with the independent Tri-City Posse in 1999, Longmire would never again play professional baseball at any level.

Personal recollection: Tony Longmire was responsible for one of my all-time favorite Harry Kalas calls. It occurred on June 15, 1995 against the Houston Astros at the Vet. The Phillies trailed, 2-1 in the ninth, but singles by Gary Varsho and Randy Ready started an unlikely rally. With two outs, Longmire hit a walkoff three-run homer off John Hudek to give the Phillies a 4-2 victory. You can only imagine how nuts Harry went over that. Just an absolute beauty of a call. If any audio of that exists, I suggest you check it out.

Longmire wasn't that bad of a player at all, but it just always seemed like he was hurt. Because of that, he developed a reputation for being a bit of a malingerer. I know Jim Fregosi was often critical of his work habits. Just when it seemed like he was going to make something of his career, it was all over in the blink of an eye. I suppose his reputation was known around baseball, since no other team gave Longmire a look after the Phillies let him go.

So that's my story on Tony Longmire. If you have any recollections of your own, feel free to share.
Posted by Ricky Jordan Fan Club at 11:34 AM