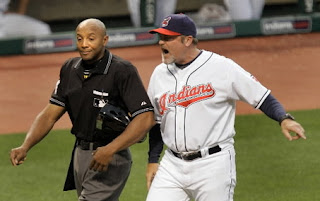 When I wasn’t pitching in High School and College, I loved to rag. ‘Ragging’ or bench jockeying is baseball jargon for verbally abusing another player, coach, umpire, or spectator. Part of why I did it was because I wanted to annoy, harass, and get into the other player or umps head. There are other ways to annoy a player or batter and I will also discuss those in the following paragraphs. The main reason I ragged was because I really enjoyed being hated by the other team. I was the guy who you wanted to punch in the face when you played against, but loved when I was on your team (Ok…maybe not loved, because I ragged the shit out of my own players too sometimes).

I believe ragging is all trial and error. There is a true scientific element to it. I do agree that there are some fool-proof methods of annoying other players or umpires. As much as I loved harassing players, umpires were my true favorite target. There are two things I loved saying to the umps that was guaranteed to get a rise out of them: Say a call was ‘brutal’ or use the work cocksucker when referring to them or a call they made.

The umpire CB Bucknor would be a prime target. He makes at least 10 cock-sucking calls a game. I would bait him for a bit and then pull out a “Get off you knees Blue! You are blowing the game!” This arouses contempt in the umpire. I can recall doing something similar in a game in college. The umpire came over to the bench and said he was going to start tossing players one by one just like a parade. So as he was walking back to the plate someone (me) said “Everybody loves a parade!” In my final college game, I was ragging on the ump the whole game. He had an idea it was me, but I didn’t cross the line…yet. I didn’t expect to pitch that day, but was called on to warm up in the 8th. I came trotting in with a couple runners aboard from the bullpen and asked the ump to dust off he corners because he hasn’t been calling them all game. He tossed me before I threw a pitch. My retort was short, sweet, and classic. “That was the best fucking call you made all game.” It really was the best call.

Another target was the battery of the pitcher and catcher. I will just break it down by position of my favorite rags.
Pitcher
- Fight at the bat rack!
- I’ve seen better arms on snakes!
- Leave him in! (when the manager is coming out to make the change)
- Put some helmets on them worms. (when the pitcher was in the dirt all game)
- You have two pitches. A ball and a strike.
- Get him a bucket. He’s throwing up!
- A compass couldn’t help this kid find the plate.
- Get back in the library Morton. (when the pitcher wore glasses)

Catcher
- Flintstone Mitt! (when the ball pops in and out of the glove)
- I could time your throw to second with a sundial (when 2nd or 3rd was stolen easily)
- Great call Catch!!! (when the pitcher just game up a homer)

Now let me get one last point across. Nothing is off limits. Height, weight, age, skill level……. This is something that sets baseball apart….the intimacy of the game between the players, fans, spectators, and coaches. There are no guys ‘up in the booth’ calling plays or stealing formations (well maybe the Phils have a mole on the ivy stealing the opposition’s signs). Our game. America’s game. Now get the hell outta here and if you are a guy…have another doughnut. If you are a woman…go do the laundry and don’t starch my shirts too much!!
Posted by BL Chris at 10:57 AM