Did You Look In the Mirror? 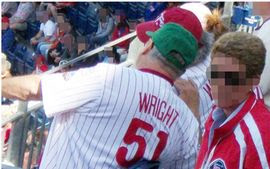 I am always amazed by the fact you can find practically everything on the internet. From Ebay to Wikipedia you can find that rare Pat Combs rookie card you always wanted to finding out that he was a Phillie’s first round pick who was compared to John Keefe. (Who is John Keefe? I don’t know much except he died in 1937, so whoever compared the 2 must have really done their homework…First lesson: don’t believe Homer Simpson, not everything on the internet is true.)
But one of my guilty pleasures on the internet has been checking out two particular sites that deal with the jerseys people wear,  Straightcashhomey.net and Whodoesheplayfor.wordpress.com. Strightcashhomey is a national site that pokes fun of people wearing lesser known player jerseys. The more obscure the better. Some recent features include Sidney Ponson, Tony Longmire and Dainius Zubrus. They will feature any sport or league as I’ve seen WNBA and Arena League jerseys on the site.  Whodoesheplayfor is a local site that, for the most part, deals with the Phillies. The site typically makes light of custom jerseys and t-shirts.
If you wish to save yourself the embarrassment of being featured here’s a few tips:
Buy jerseys of players who are under a multi-year deal. Last September, the guy who laughed at you as he grabbed the last Cliff Lee jersey at Modell’s and left you with Blanton or Happ kind of regrets that decision now.
Be wary of customizing a jersey. I have no problem with you getting your name and favorite number on a jersey, but nicknames and phrases (i.e. Pop Pop or World Champs on an 08 numbered jersey) are big mistakes and you are asking to be ridiculed.
Don’t shop at Forman Mills.  Those jerseys are inexpensive for a reason: they blow.  They are cheap imitations and have more than their fair share of flaws.
Don’t rush to get jerseys.  Like voting for the All-Star game you need to de research and make an informed decision. Many time players will have a good month or two until scouting catches up to them. There is a guy who I seen several times at the ballpark wearing a Brandon Duckworth jersey.  I’m not sure if he can’t afford a new one or just hasn’t given up hope yet, but it ALWAYS makes me laugh.
“Retire” your jerseys. I happen to like when I see someone wearing an atypical jersey. I respect someone whose favorite player was David Coggin or Marlon Byrd and they buy the jersey, but you should also expect a few comments than usual when they are no longer on the team.
Teams with success can trump all else. Luckily the Phillies have been atop the MLB food chain the past 2 seasons.  So if your favorite player now is not named Utley, Rollins, Halladay or Howard but Ruiz, Madson or Happ now is the time to buy. Don’t believe me? Check out Mitchell & Ness they sell a Dave Hollins throwback jersey. DAVE HOLLINS!
The most important thing though is to support the Phillies. Have fun and hope to see you at the ballpark.
Jay Wrizight
jaywrizight@yahoo.com
Posted by BL Chris at 9:37 AM