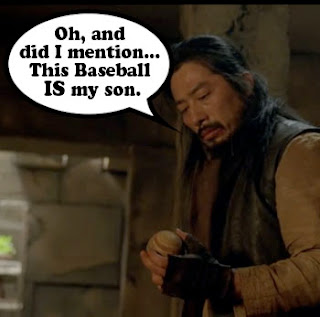 The TV show, Lost, had is series finale and left people just as stunned and confused as when they got hooked on the show six years ago. Although it may have been a good show, I never even so much as attempted to watch it. Mostly because if I was going to debate my friends it would be over important issues like what is the most effective grip for a change-up, but I do know how the shows fans felt. Even when it comes to Major League Baseball, there are many issues I can’t, don’t, or won’t understand.

#1. The DH. I can’t think of another professional league in which there is a different set of rules for each conference. Imagine if the AFC had a pass punt and kick competition to break ties.

#2. Why some Hall of Fame voters will not vote for a candidate on their first year of eligibility. I know Babe Ruth didn’t get in his first year, but let it go.

#3. Interleague Play. I’m not sure why so many complain about it. It brought a lot of people back to the ballparks after the strike in 1994. I think it could be restructured, but I think it should stay.

#4. The All-Star Game deciding home field advantage for the World Series. This may be the dumbest idea in the history of professional sports (well, next to the “glow puck”). Why should a player on a team 15 games out in mid-July who is only there because every team HAS to have a representative be a factor in who gets the advantage?

#5. Why are people in kayaks in the bay behind San Francisco’s ballpark for meaningless games? Historic home runs and playoff games are one thing but the possibility of drowning to retrieve an Aaron Rowand homer is kinda dumb.

#6. Speaking of homers, why do people throw back opposing teams home run balls at Citizens Bank Park? It’s stupid for 2 reasons. First and foremost, it’s Chicago’s tradition. I don’t suppose you’d want to sing Sweet Caroline during the 7th inning stretch, would you? And secondly, the ball girl retrieves it and gives it to a little kid who has better seats than you.

#7(a). Why does anyone wait in line 45 minutes for Chickie and Pete’s Crab Fries? I love them too, but that is ridiculous.
#7(b) Why do the Chickie’s stand only make one basket of fries at a time? Hey retards, the 82 people in line aren’t waiting to buy a coke.

#8. Why does Greg Amzinger have a baseball related job? If you are not familiar, he is one of the hosts for the MLB network. His picture can also be found next to the word, tool, in the dictionary.

#9. Does anyone have video of Nyjer Morgan playing hockey? Pookie, from New Jack City, playing baseball is funny, but hockey? Pure Gold.

#10. Seriously, Can any one tell me why the Hot Pants Patrol has not been permanently resurrected? (No explanation necessary.)

Feel free to comment if you have the answers to any of these questions or a burning one of your own.