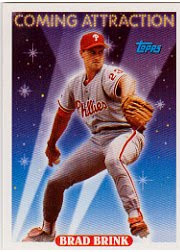 About Brad Brink: When a Major League Baseball team invests a lot in a pitcher, be it a high draft pick or a high-profile acquisition, there is always a leap of faith involved when it comes to health . Sure, no move should be made without due diligence, but there is always that slight bit of uncertainty. If a pitcher of this caliber comes down with even the slightest injury early in his tenure with his new club, two words seem to come to the forefront: Damaged Goods. Every team has been bitten by this, and the Philadelphia Phillies are certainly no exception. In the recent history of the ballclub, Freddy Garcia seems to be the poster boy. In the mid to late 1990s, it was Tyler Green. But in my nearly quarter-century Phillies addiction, the first pitcher I recall carrying this label was a former University of Southern California and Alaska Goldpanners standout by the name of Brad Brink. Considered a "can't-miss" prospect when he was drafted, Brink made all of ten appearances in a Phillies uniform, and never won a game.

Brad Brink's professional baseball career began in 1986 when the Phillies selected him with the seventh overall pick of that year's MLB Draft. It was believed the Phils had found a future ace, but shoulder discomfort ended Brink's first pro season after just five appearances and concern that he had been overworked at USC. Brink would pitch a full season in 1987, splitting time with Reading and Clearwater. Though his overall numbers were rather pedestrian (7-9 with a 4.33 ERA in 29 appearances), the Phillies were still bullish on his future. In 1988, however, Brink's career took an ugly turn. Shoulder woes put Brink on the disabled list twice and limited him to just 17 starts. Initially diagnosed with a slightly torn rotator cuff, Brink tried to pitch through it at the start of the 1989 season. After just three starts in '89, it was revealed that Brink's rotator cuff was completely torn and would require reconstructive surgery. As a result, he would miss the remainder of the 1989 season, the entire 1990 season, and a significant portion of the 1991 season. But the Phils stood by Brink, and after a strong start to the 1992 season, he finally got the call to the big leagues.

On May 17, 1992, nearly six years after he had been a first-round draft pick by the Phillies, Brad Brink finally appeared in an MLB game. He allowed four runs in six innings and got a no-decision in what became a 5-4 victory over the Cincinnati Reds at Riverfront Stadium. He didn't fare as well in his next start, a 10-0 loss to those same Reds. Overall, Brink would make eight appearances (seven starts) for the Phillies in 1992, going 0-4 with a 4.14 ERA. The remainder of Brink's career as a Phillie consisted of two relief appearances as a September callup in 1993. He would be claimed on waivers by the San Francisco Giants at the end of Spring Training in 1994. He would appear in four games for the Giants in 1994, the last four outings of his MLB career. His pro career ended a year later after spending time in the organizations of the Giants and Oakland Athletics.

Personal recollection: I'm a little bit younger than some of the people who write for and read Drunk Phils Fans, so there's only so far back I can go when citing specific examples. Still, I never remembered hearing the term "damaged goods" regarding any players until Brad Brink came along. To this day, whenever a top Phillies pitching prospect gets hurt, it's only a matter of time until Brink's name is mentioned. I guess given what ultimately happened to Brink and Tyler Green, it's not very surprising that the Phils have only used two first-round picks since 1992 (Carlton Loewer in 1994 and Joe Savery in 2007) on college pitchers.

As far as seeing Brink pitch, it's a small sample size, but I did see him in action a couple times. Once was a Sunday Night game against the St. Louis Cardinals in which he pitched well, allowing three runs in seven innings, but the bullpen coughed it up late. I also saw him start the first game of a doubleheader against the Cards, but that one didn't go so well, as he lost to Donovan Osborne, 8-1. What would a healthy Brad Brink have had to offer? We'll never know.

So that's my story on Brad Brink. Feel free to add any personal recollections.
Posted by Ricky Jordan Fan Club at 4:40 PM