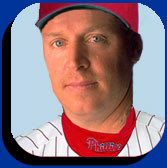 About Ed Vosberg: An old baseball saying claims that if you're lefthanded, you'll always have a job. One person who must have bought into that theory was Ed Vosberg. A classic journeyman if there ever was one, Vosberg wore the uniforms of 26 different teams over the course of 21 professional seasons. Among the uniforms he wore were those of the Philadelphia Phillies. Like pretty much everywhere else he roamed, Vosberg's stay in Philadelphia was relatively short, though it's interesting to note there was only one MLB team that he appeared in more games for.

Vosberg's long and strange pro baseball journey began in 1983, when the San Diego Padres selected him in the third round of that year's Draft. He would reach the majors three years later, appearing in five games for the Padres, including his only three starts at the MLB level. In 1988, Vosberg was traded to the Houston Astros, and the following year was sent to the Los Angeles Dodgers, but never appeared for either organization's parent club. Vosberg would make 18 appearances for the San Francisco Giants in 1990, but it would be another four years before his next MLB stint. His 1991 season was spent in the organizations of the California Angels and Seattle Mariners. Vosberg's strangest journey came in 1992, when he found himself playing in Italy of all places, manning first base when he wasn't pitching. He would return to North America in 1993, spending that season in the Chicago Cubs' system. In 1994, it was off to Oakland, where Vosberg worked his way up to the parent club, appearing in 16 games. It was in 1995, however, that Vosberg finally stuck in the big leagues, working in 44 games for the Texas Rangers, where he would stay until 1997. Late in the '97 season, Vosberg was traded to the Florida Marlins. He'd make just 17 regular season appearances as a Marlin, but he did get a World Series ring out of it. Vosberg was part of the infamous Marlins post-championship fire sale, heading back to the Padres a few weeks after the World Series, but a shoulder injury wiped out his 1998 season. He would make 15 appearances with San Diego in 1999 before being released. Vosberg also had a four-game cameo as a member of the Arizona Diamondbacks in '99, then signed with the Colorado Rockies, meaning he was a member of every NL and AL West Division organization over the course of his career. He never appeared in a game for Colorado. On June 28, 2000, the Rockies swung a deal, and Vosberg's next destination was Philadelphia. Heading to Colorado was the famed Player to Be Named Later, who turned out to be pitcher Sean Fesh, a southpaw who never reached the majors.

As you could probably figure, Ed Vosberg's arrival in Philadelphia was not met with much fanfare. The Phillies were fully immersed in a dismal season that would see them lose 97 games, so it was understandably tough to get excited over the acquisition of a 38-year old journeyman lefty. Vosberg made his Phillies debut on the Fourth of July, 2000. He would appear in 31 games for the Phils in 2000, going 1-1 with a 4.13 ERA before returning as a non-roster invitee in 2001. Vosberg didn't make the club out of Spring Training, but he did get recalled in June. He pitched respectably in 18 outings with the big club, maintaining a 2.84 ERA. As the trade deadline approached, the Phillies made a deal with the New York Mets, bringing in Turk Wendell and Dennis Cook in an attempt to bolster the bullpen. Vosberg was the odd man out, and was sent back to the minors. When the rosters expanded in September, Vosberg was not among those who were called up. Granted free agency following the '01 season, Vosberg headed north of the border, signing with the Montreal Expos. He made the Expos out of Spring Training, but was released after appearing in just four games, which ended his MLB career. The remainder of his 2002 season was spent in the Mexican League as a member of Diablos Rojos del Mexico (Mexico City Red Devils). Five years later, Vosberg made a comeback in the Mexican League, appearing as a member of Potros de Tijuana (Tijuana Colts) and Guerreros de Oxaca (Oxaca Warriors).

As if Vosberg's journey wasn't crazy enough, he can also claim this little tidbit: he played in the Little League World Series (Tucson, AZ in 1973), College World Series (Arizona, 1980), and World Series (Florida Marlins, 1997). He also won a Mexican League Championship with Mexico City in 2002. If nothing else, Vosberg had one interesting career.

Personal recollection: Unless you're a fan of the Texas Rangers, you probably don't have too many memories of Ed Vosberg playing for your team. He pitched in 138 games for Texas, but his 49 appearances as a Phillie are his second-most with any one club. Looking at his numbers, he really didn't pitch too badly with the Phils, though the main thing I remember about Vosberg is that he balked home the eventual winning run in an extra-inning game against the New York Yankees at the Vet not too long before he was sent down. I guess in retrospect, the Phillies wouldn't have been any worse off keeping Vosberg as opposed to making that deal with the Mets. Turk Wendell was damaged goods, and Dennis Cook was horrendous down the stretch in 2001. But everyone has 20/20 hindsight. I don't know if Vosberg has any plans to write a book chronicling his pro baseball adventures, but it would make a pretty interesting read, especially the Italy part.

That's my story on Ed Vosberg. Feel free to share any of your own recollections.
Posted by Ricky Jordan Fan Club at 2:08 PM