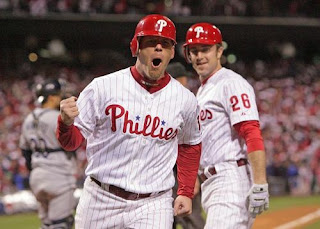 About Geoff Jenkins: "One-hit wonder" is a term we've all heard before. We generally reserve it for the music business, where a singer or band emerges with one massively popular song before fading into obscurity. In sports, it can refer to a player who seemingly comes out of nowhere for one shining moment, only to rarely or never be heard from again. Or it can be a player who had an otherwise disappointing season, but came through when it mattered the most. If you are a fan of the Philadelphia Phillies, Geoff Jenkins would certainly have to fit into the latter category. With one memorable swing of the bat during that glorious autumn of 2008, Jenkins made everyone forget about his lackluster regular season, and earned a very special place in the hearts of Phillies fans.

On these Random Past Phillie posts, you will often see obscure players being featured, perhaps players you've never heard of or simply forgot about. With the 2008 World F-ing Championship still fresh in our minds, I'm sure you haven't forgotten about Geoff Jenkins, and it would be a stretch to say he was an obscure player. In fact, Jenkins was a very good player for much of the 2000s. The team that he played for (the Milwaukee Brewers), however, was not. In Jenkins's ten seasons in Milwaukee, the Brewers finished above .500 just once, when they went 83-79 in 2007. As a result, Jenkins didn't get the recognition that he would've gotten playing on a successful team, though many seemed to notice he bore a facial resemblance to a better-known athlete who played his home games in Wisconsin: Brett Favre.

A product of the University of Southern California, Jenkins was selected by the Brewers in the first round (ninth overall) in the 1995 Draft, reaching the majors three years later. He would start to establish himself in 1999, hitting .313 with 21 home runs in 135 games. A year later, Jenkins would hit .303 with 34 homers, and it looked like a star was born. Unfortunately, the injury bug would hit Jenkins hard over the next two seasons. Shoulder woes limited him to 105 games in 2001, and a dislocated ankle shelved him after just 67 games in 2002. Jenkins rebounded strongly in 2003, hitting .296 with 28 homers and career-high 95 RBI in 124 games, but a thumb injury cost him the final month of that season. Finally healthy in 2004, Jenkins saw his average dip to .264 but he still blasted 27 roundtrippers and knocked in 93. The following season, he rebounded to .292 with 25 homers as the Brewers went 81-81, their first non-losing season since 1992. Jenkins's production would drop somewhat during the 2006 and 2007 seasons, and the Brewers chose not to re-sign him following the '07 campaign. Looking for a lefthanded bat to platoon with Jayson Werth in right field, the Phillies brought Jenkins on board for the 2008 season.

After spending the better part of a decade starring for mostly poor teams in Milwaukee, Jenkins now found himself in a platoon role on a team that was expected to be a serious contender. While any player would naturally prefer to be a key contributor, Jenkins seemed fine with sacrificing some playing time for more wins. On the field, though, Jenkins didn't seem completely comfortable with his new playing situation, and could never quite find a groove at the plate. As the season wore on, Jayson Werth began to prove he was a legitimate everyday MLB player, which relegated Jenkins to a bench role. Overall, Jenkins hit .246 with nine home runs and 29 RBI in 115 games. The Phillies would win the National League East, meaning Jenkins was part of a playoff team for the first time in his career. However, a late-season hip injury and the acquisition of Matt Stairs had many wondering if Jenkins would be included on the team's postseason roster. He was, and though it took a while, it would pay off in the end.

As luck would have it, the Phillies began their 2008 playoff run against none other than the Brewers, defeating Milwaukee in four games in the best-of-five NLDS. Jenkins made just one appearance against his old team, flying out as a pinch-hitter in Game 3. The Phils would win the NLCS over the Los Angeles Dodgers in five games, with Jenkins again making one appearance, a pinch-hit groundout in Game 3. In the World Series against the Tampa Bay Rays, Jenkins had another pinch-hit groundout in Game 3, but he would make his mark two games and one long rain delay later. With the score tied at 2-2, inclement weather forced Game 5 to be suspended prior to the bottom of the sixth inning. Play finally resumed 48 hours later with the pitcher's spot due to lead off for the Phillies. With righty Grant Balfour on the mound for the Rays, Charlie Manuel sent Jenkins to the plate. He responded by doubling deep to right-center, and he would come around to score the go-ahead run when Akinori Iwamura couldn't hang on to Jayson Werth's blooper to shallow right. The Rays would tie the game in the top of the seventh, but the Phils went back ahead in the bottom half of the frame, a lead they wouldn't relinquish en route to the second World Championship in franchise history. Prior to the game's resumption, everyone talked about momentum being on the side of the Rays. Jenkins took care of that with one swing, which likely turned out to be his last as an MLB player. He was released by the Phillies at the end of Spring Training in 2009, and never landed anywhere else. Though he has yet to officially retire as of this writing, it is pretty safe to assume Jenkins has played his final game.

Personal recollection: I saw the Phillies play in Milwaukee in 2004, and when talking to a Brewers fan, I noted that Geoff Jenkins was a pretty solid player. The Brewers fan concurred, saying it was a shame nobody really knew about him. I was pretty excited when he signed with the Phils, thinking he and Jayson Werth would form a pretty productive platoon. It didn't really work out that way, but you had to feel really good for Jenkins when he hit that double in the World Series.

I think what impressed me the most about Jenkins was that he never sulked about his role. Whenever something good happened for the Phils during the 2008 postseason, Jenkins seemed to be one of the first guys up off the bench cheering on his teammates. He put his personal pride aside for the good of the team. You have to respect that. I was surprised nobody else gave him a shot after the Phillies released him. If Game 5 of the '08 World Series does turn out to be the final game of Jenkins's MLB career, that's a hell of a way to go out.

So that's my story on Geoff Jenkins. If you have any stories of your own, feel free to share.
Posted by Ricky Jordan Fan Club at 7:12 PM