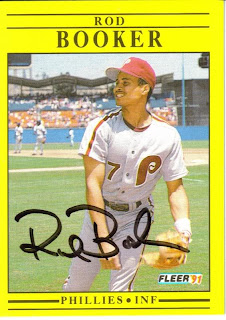 About Rod Booker: All teams in professional sports go through down periods at one time or another. The Philadelphia Phillies have gone through more than their fare share of rough patches over the course of their existence. During those times, the ballclub has employed many players that probably wouldn't have survived on the rosters of most other teams of the day. When looking back on such eras, the mere mention of such a player's name is sure to draw a sarcastic chuckle, a roll of the eyes, or some other unfavorable reaction. One player who fits that mold would have to be Rod Booker, a utility infielder who spent an unmemorable year and a half on the Phillies' roster during what was largely an unmemorable point in the franchise's history.

Rod Booker's professional baseball career began in 1980, when the Minnesota Twins selected him in the fourth round of that year's Draft. He would never make it to The Show in Minnesota, and was sent to the St. Louis Cardinals in a cash deal prior to the 1983 season. Booker spent four more years toiling in the minors for St. Louis, before finally getting the call to the big leagues early in the 1987 season. He would hit .277 in 44 games for the eventual National League Champion Cardinals, but was not included on the postseason roster. The majority of Booker's 1988 and 1989 seasons were spent in the minors, appearing in 28 MLB games during a few cups of coffee with the big club. Shortly after the '89 season ended, the Cardinals released Booker. Prior to being named general manager of the Phillies in 1988, Lee Thomas had been the director of player personnel in St. Louis. During the early days of his tenure, it seemed Thomas couldn't get his fill of former Cardinals. So when the Cards set Booker free, guess who came calling?

On December 14, 1989, the Phillies signed Booker to a minor league contract and invited him to Spring Training as a non-roster invitee. At the time, the Phils were coming off consecutive last place finishes, and weren't exactly deep when it came to utility infielders. A brief (and largely forgotten in light of what happened in 1994) lockout delayed the start of Spring Training in 1990, but Booker impressed enough during the truncated camp to be considered a serious candidate for a spot on the Opening Day roster. When Steve Jeltz was traded to the Kansas City Royals in late March, it became clear that Booker was going to make the club. He would spend the entire '90 season with the Phillies, hitting .221 in 73 games. Though his output was considerably less than impressive, Booker again headed north with the Phils as the 1991 season began. He appeared in just 28 games that season, hitting .226. Shortly after the All-Star break, the Phillies optioned Booker to AAA Scranton/Wilkes-Barre. Or at least they thought they did. A clerical error on the part of the National League office led the Phils to believe Booker had a minor league option left. He did not. It turned out to be a moot point, as Booker passed through waivers and was outrighted. Perhaps feeling badly about the situation, the Phillies released Booker a couple weeks later. He would sign with the Houston Astros for the 1992 season, but never made it to the parent club in what turned out to be his final pro season.

Personal recollection: I guess one of the many signs that the Phillies were not very good in the late 80s/early 90s was the fact that Rod Booker and Steve Jeltz were once the main competitors for the utility infielder role. Booker didn't get a whole lot of playing time, and didn't do a whole hell of a lot when he did play, but I do have a couple of positive memories. One was a crazy game at Dodger Stadium, when Booker entered the game as part of a double switch in the eighth inning. He ended up going 3-for-3 and hitting a bases-clearing triple in the 11th inning to score the decisive runs in a 15-12 Phillies victory. In that same game, Phillies starting pitcher Dennis Cook homered off Fernando Valenzuela, Don Carman gave up a grand slam to Kal Daniels, and John Kruk made a game-saving sliding catch on a Stan Javier liner to left in the ninth inning, aided by the fact that Alfredo Griffin (who would've scored easily one way or another) didn't tag up at third base on the play. Aside from that, I attended a game against the Astros where Craig Biggio fell down trying to track a Booker drive to center, playing it into a triple. I also remember a Home Companion video highlight with Booker hitting a walkoff single against the Padres at the Vet, scoring Von Hayes with the winning run. Remember, there weren't always a ton of highlights to show on those Home Companion videos back then. Until I did research for this post, I didn't realize Booker's wife was a distant cousin of Jackie Robinson. So he had that going for him, which is nice.

That's my story on Rod Booker. Feel free to share any personal recollections.
Posted by Ricky Jordan Fan Club at 11:19 AM