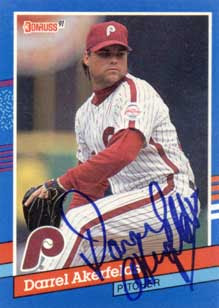 About Darrel Akerfelds: You see it all the time. A guy is a high draft pick. Doesn't really pan out, bounces around for a while. Then suddenly, the right opportunity presents itself, and he starts to realize his potential. It can be a springboard to a productive career. Or it could just be lightning in a bottle, and that player never comes close to duplicating his career year. The latter would be the case for one Darrel Akerfelds, a former first-round draft pick who in 1990 became a surprising fixture in the Phillies' bullpen, but was never able to build off that one solid season.

A graduate of Columbine High School nearly two decades before it would become a household name in the worst way imaginable, Akerfelds went on to the University of Arkansas and was eventually selected by the Seattle Mariners with the seventh overall pick in the 1983 Draft. Despite the high selection, Akerfelds was traded to the Oakland Athletics along with reliever Bill Caudill for pitcher Dave Beard and catcher Bob Kearney following the '83 season. Akerfelds would make his way to Oakland in 1986, appearing in two games for the A's. The following season, he was shipped to the Cleveland Indians in a deal that sent infielder Tony Bernazard to Oakland. Akerfelds appeared in 16 games for the Tribe, including what would be the only 13 starts of his career, going 2-6 with a 6.75 ERA. After spending the 1988 season in the minors, Akerfelds was selected by the Texas Rangers in the Rule 5 Draft. He didn't make the Rangers out of Spring Training, but stayed in the organization as the Indians declined the return offer from Texas. Akerfelds would appear in six games for the Rangers in '89, going 0-1 with a 3.27 ERA. He would return to the Rangers for Spring Training in 1990, but was the victim of a numbers game. The Phillies decided to take a chance with Akerfelds, and on March 31 of that year, acquired him from Texas for cash considerations.

At the time of his acquisition, Darrel Akerfelds was pretty much a forgotten failed first-round pick who'd had little more than a cup of coffee with three MLB teams. Given an opportunity with a Phillies team coming off two consecutive last-place finishes, however, Akerfelds flourished. Though not possessing pinpoint control, he was unscored upon in his first 13 appearances, and the Phils were a surpise themselves, spending much of the early going at or near the top of the NL East standings. A sinkerballer who also threw a knuckle-curve, Akerfelds would eventually work himself into a setup role for closer Roger McDowell. While his scoreless streak would come to an end, Akerfelds kept his ERA in the low-to-mid twos for the duration of the first half. The Phillies themselves tapered off, but still managed to hover around the .500 mark for a good portion of the season. Unlike setup men today, Akerfelds was often called upon to work multiple innings, which may explain why he seemed to wear down in the second half. He would end the 1990 season with a 5-2 record, three saves, and a 3.77 ERA in 71 appearances.

With a full MLB season finally under his belt, it was hoped Akerfelds would be able to build off his performance in 1991. It didn't happen. For Akerfelds, the '91 season was a continuation of his late '90 struggles. He would go 2-1 in 30 appearances, but with a 5.26 ERA, walking 27 batters in 49 and 2/3 innings. The Phils sent Akerfelds to the minors in early July, and he would never make it back to the big leagues. Cut loose by the Phillies after the '91 season, Akerfelds spent 1992 bouncing around the organizations of the Baltimore Orioles, Rangers, and Pittsburgh Pirates, before heading to the Toronto Blue Jays in 1993. After sitting out the 1994 season, Akerfelds returned to baseball in 1995 as a replacement player for the California Angels. After the strike was settled, the Angels sent Akerfelds to the minors, in what turned out to be his final pro season. He would return to MLB as the bullpen coach for the San Diego Padres in 2001, a position he still holds today.

Personal recollection: Darrel Akerfelds was another one of those guys who came out of nowhere, looked like maybe we had something, and then was gone just like that. I remember the raves about his knuckle-curve when the Phillies first got him. I guess that kept hitters off balance for a while, but they eventually figured it out.

I also remember going to Photo Night one year, and as is customary, Akerfelds joined his teammates in chatting with fans, posing for pictures, shaking hands, etc. He seemed happy to be doing it. Then he got up to one kid and went to shake his hand. The kid pulled his hand back and asked him if he knew when Ricky Jordan would be out. Now, Jordan was my favorite player back then, but I can assure you that wasn't me. I don't remember how Akerfelds responded, but I felt pretty bad for him. I guess it didn't affect his performance on the mound too much that night, because he ended up getting the win after a late homer by Darren Daulton put the Phils on top to stay. So I guess that kid got his in some way.

That's my story on Darrel Akerfelds. Feel free to share any of your own
Posted by Ricky Jordan Fan Club at 12:06 PM