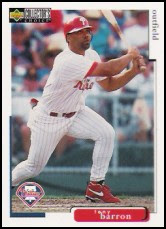 About Tony Barron: When Andy Warhol made his claim that everyone will have their fifteen minutes of fame, it's doubtful he had Tony Barron in mind. But for many Philadelphia Phillies fans who suffered through the lean years of the mid to late 1990s, it's hard to forget Barron's shining moment. A 30-year old rookie just two years removed from being a replacement player, it took five games for Barron to make a name for himself among Phillies fans. In the fifth inning of a game against the St. Louis Cardinals at Veterans Stadium on July 31, 1997, Barron made one of the greatest catches in franchise history, a fully-extended diving grab of a Gary Gaetti liner, holding on to the ball while slamming face-first into the unforgiving Vet turf. The Phils went on to win that game, 2-1 in ten innings. Barron would play just 57 games in a Phillies uniform, but for those who saw that catch, he definitely made a lasting impression.

For a long time, however, it didn't seem very likely that Tony Barron would make an impression anywhere as a Major League Baseball player. Selected by the Los Angeles Dodgers in the seventh round of the 1987 Draft out of Willamette University, Barron spent seven seasons in the Los Angeles system and despite putting up solid offensive numbers nearly every year, never advanced beyond AAA. Granted free agency after the 1993 season, Barron moved on to the Seattle Mariners. Splitting the 1994 campaign between AA and AAA, Barron hit .295 with 20 home runs in 110 games. With MLB players out on strike as Spring Training began in 1995, it was decided that replacement players would be used until an agreement was reached. Seattle made Barron one of the replacements. The regular players would eventually return, and Barron was sent back to the minors, but he wasn't long for the Seattle organization, who released him just nine games into the season. Barron found work in the Montreal Expos organization, where he spent the remainder of the '95 season. He'd return to Montreal in 1996, and at long last, Barron made his MLB debut on June 2 of that year, striking out as a pinch-hitter against the San Francisco Giants. As it turned out, it would be Barron's only at-bat as an Expo. Shortly after the '96 season ended, Barron was cut loose by the Expos and signed a minor league deal with the Phillies.

The first half of the 1997 season was a disaster for the Phillies. They were 32 games out of first place AT THE ALL-STAR BREAK, and their record was an embarrassing 24-61 at that point. It seemed as though the team would challenge the 1962 New York Mets for the worst single-season record ever as they sunk to 30-72 as the trade deadline loomed. On July 21, mainstay Darren Daulton approved a trade to the eventual World Champion Florida Marlins. To fill his roster spot, the Phils called on Barron, who was hitting .328 for Scranton/Wilkes-Barre at that point. Barron would collect just one hit in nine at-bats over his first five games as a Phillie, but the aforementioned catch may have loosened him up at the plate. He would collect four hits in his next game, and would go on to hit a very respectable .286 with four home runs and 24 RBI at the MLB level, while settling in as the starting right fielder for the Phils over the season's final two months. In the offseason, the Phillies added Bobby Abreu and Doug Glanville to the outfield, meaning Barron would have to battle Ruben Amaro, Jr. for a roster spot. The spot ended up going to Amaro. Barron was sent back to Scranton/Wilkes-Barre, where he would spend the entire 1998 season. He would never return to the majors. Out of baseball in 1999, Barron headed for Mexico, where he suited up for five different teams between 2000 and 2002.

Personal recollection: When it comes to Tony Barron memories, it obviously starts with the catch. If anyone has any footage of this, feel free to share it. Describing it really does no justice. It is right up there with Aaron Rowand's crash into the fence in 2006 among the greatest I've ever seen by a Phillie. Also notable about that catch was that Curt Schilling was on the mound. As you're well aware, Schilling never hesitates to offer his opinion on any subject, and made his dislike for replacement players known in no uncertain terms. I don't know if Barron's catch swayed him at all, but I guess it couldn't hurt. I was at the game the night after Barron made his catch. Waiting for the gates to open, there were a couple Cardinals fans in front of me. They remarked that Barron's catch was the best they'd ever seen in person. Coming from fans who saw Ozzie Smith on a daily basis for fifteen years, that's no small compliment.

Aside from the catch, Barron was a pretty decent hitter. Not a lot of power or speed, but he made solid contact. I remember attending a game against the New York Yankees at the Vet, and some Yanks fans gave a derisive "Tony Barron? Who?" when he stepped to the plate. Sure enough, Barron homered off Hideki Irabu shortly thereafter and shut 'em all up. That was the first year of Interleague Play, when the Phillies swept the Yankees in a pretty memorable series. As a matter of fact, Barron won the final game of that series with a walkoff walk. Another thing I recall about Barron is that he didn't wear batting gloves, which isn't something you see too much of anymore. Even though he was a little up in years, I was surprised Barron never caught on anywhere else. I guess the replacement player stigma is a tough one to shed. Oh well, we'll always have The Catch.

That's my story on Tony Barron. Do you have one?
Posted by Ricky Jordan Fan Club at 12:10 AM