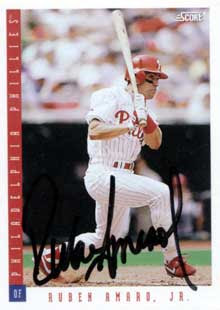 Dear Ruben,
You may not know me but I certainly know you. First, a little about myself, I’ve been a life-long Phillies fan and a season ticket holder for the past eight seasons. I currently am a writer for the Drunk Phillies Fans Blog. It’s blowing up huge! We just got T-Shirts made and they are way better than any one of the giveaways you have authorized. I’ll get you one. What size do you wear?
Now, what I know about you. And it’s more than you being the Phillies current G.M.. You see, in 1992, my friends and I conducted our annual Fantasy Baseball draft a week after the season started. “Bob” (I won’t give away his real name as to protect him from more public humiliation than he has already endured) spent $18 of his $260 payroll on you. For comparisons sake, I got Ryne Sandberg for $14. You were batting .304 with 3 HR and 6 RBI’s at the time of the draft. You then went 2 for 43 and ended April without hitting another homer and managed only one more RBI finishing the month batting .138.  We still laugh about it every year.
You might say that’s old news, but a popular saying goes some thing like “those who do not learn from history are doomed to repeat it”. It seems like your career as GM is following the same pattern as your playing career: a great start and then less than mediocre from then on.
I know what you are saying. You can’t judge a GM on a year and a half on the job and you most certainly are correct.  You have gotten a lot of credit for guiding the team back to the World Series, but to be honest Pat Gillick and even Ed Wade are more responsible for that. Your 2 major moves for 2009 were signing Raul Ibanez and trading for Cliff Lee. Ibanez started out like a man possessed and Phillies fans joked, “Pat Who?” But looking deeper, Ibanez battered a poor Nationals pitching staff for 8 homers and 21 RBI’s. Without those stats, he batted .247 with 26 HRs and 72RBI’s in 116 games or averaged over 162 games he’d have .247 with 36 HRs and 100 RBI’s, which is very Burrell-like. Then there is Lee. Simply put, this is where I lost all respect for you. I don’t think I’ll ever believe it was about replenishing the farm system and not about the money. But even if it was, dude, you got hosed in that trade. Then, to make it worse, you screwed up Aumont by starting him in AA while asking the 21 year old to convert from reliever to starter and use 4 pitches instead of 2. He got lit up.
So now it’s 2010, and what have you done? I really liked the Polanco signing, but you have yet to address the bullpen issue and that is a major issue and it was last year too. Maybe ignore it long enough and it will go away?  This team is struggling in a major way. This team has the best SB % but more than half of the MLB teams have more steals than the Phillies have attempts. The Phillies have scored 3 runs or fewer 41 times this season.  Since only 2 pitchers on the roster have an ERA under 3, I’m guessing this is not a recipe for success.
All that I’m saying is prove you can learn from your mistakes and stop by some time we’ll have a beer, talk baseball, and laugh about “Bob’s” eighteen-buck blunder.
Your Friend,
Jay Wrizight
Posted by BL Chris at 12:36 PM