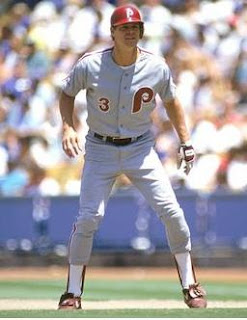 About Dale Murphy: Regardless of the era, it seems as though the Philadelphia Phillies have always had a knack for acquiring star players on the downside of their careers. Perhaps fans of other teams can make the same claim, but the Phillies are obviously more noticeable to us since we follow them much more closely. Whatever the case may be, it seems like they've brought many players in who'd had great success elsewhere, perhaps trying to get one last hurrah out of them. More often than not, it is painfully obvious that their days as an effective player have long since passed them by. Some have their moments, though. Dale Murphy had his moments as a Phillie, though he came nowhere close to playing at the level that made him a two-time National League MVP as a member of the Atlanta Braves.

Murphy's journey in professional baseball began in 1974, when the Braves made him the fifth overall selection in that year's Draft. Breaking into the pro ranks as a catcher, Murphy had cups of coffee in the majors in 1976 and 1977 before sticking for good in 1978. He had his share of problems behind the plate, and primarily played first base in his first full MLB season. Murphy hit just .226 in '78, but did hit 23 home runs. A knee injury limited him to 104 games in 1979, but Murphy returned to health in 1980. He was also moved to the outfield full-time and his career took off. Murphy made his first All-Star team in '80, when he hit .281 with 33 home runs. He slumped to .247 in the strike-interrupted 1981 season, but in 1982 he established himself as a premier player. Appearing in all 162 games, Murphy hit .281 with 36 homers and a league-best 109 RBI for the NL West Champion Braves. For his efforts, Murphy was named National League MVP. Proving it was no fluke, Murphy was even better in 1983, hitting .302, again blasting 36 home runs, and again leading the NL in RBI, this time with 121, while playing in 162 games for the second of what became four consecutive seasons. Once again, Murphy was named NL MVP. He wouldn't make it a three-peat in 1984, but Murphy did hit 36 homers for the third consecutive season while driving in an even 100. He would have an even better 1985 season, batting .300 on the nose with 37 roundtrippers and 111 RBI. Murphy had a down season in 1986, hitting .265 with 29 homers and 83 RBI, but he bounced back in a big way in 1987, batting .295 while hammering a career-best 44 home runs, knocking in 105.

The Braves were unable to duplicate their 1982 success and were sinking to the depths of the National League, but in Dale Murphy they had arguably the best MLB player of the 1980s to that point and what appeared to be a sure-fire Hall of Famer. Perhaps the losing began to take its toll on Murphy, as his numbers nosedived in 1988, and he never really recovered from that point onward. In that '88 season, Murphy hit just .226 with 24 home runs and 77 RBI. It was no better in 1989, as he hit .228 with 20 homers and 84 RBI. Murphy's fall from grace continued in 1990, as he was hitting .232 with 17 home runs and 55 RBI through 97 games. The Braves were in a rebuilding mode by this point, and rumors swirled that Murphy's days in Atlanta were numbered. Though he wasn't moved at the 1990 trade deadline, he was able to pass through waivers. On August 3 of that year, the Phillies and Braves agreed to a deal that would send Murphy and a player to be named later to Philadelphia in exchange for pitcher Jeff Parrett and two players to be named later. Being a "10 and 5" player, Murphy had the right to refuse the deal, but he approved and became a Philadelphia Phillie. To complete the deal, the Braves threw in pitcher Tommy Greene, while the Phillies sent infielder Victor Rosario and outfielder Jim Vatcher to Atlanta.

It may have seemed odd for Murphy to accept a trade to Philadelphia. Though the Phillies were perceived to be on the right track after two consecutive last place finishes, they were still en route to their fourth consecutive sub-.500 season and weren't expected to do any serious contending any time soon. But it had become evident that Murphy needed a change of scenery, and he did pick things up a little after the trade, concluding the '90 season by hitting .266 with seven home runs and 28 RBI in 57 games, adding some pop to a Phillies lineup that saw no player hit more than 17 home runs that year. The 1991 season would turn out to be Murphy's only full one as a Phillie. While not disastrous by any means, it wasn't quite the smashing success the ballclub had envisioned. In all, Murphy hit .252 with 18 home runs (his lowest total for any season in which he played in more than 104 games) and 81 RBI in 153 games. It was announced prior to the 1992 season that Murphy would get more days off in hopes it would benefit him and the team in the long run. Unfortunately, they never had a chance to carry out the plan. Murphy was hobbled with a sore left knee all spring and though he started the season on the active roster, it was immediately clear that the knee wasn't responding to treatment. He would head to the disabled list during the second week of the season. After missing three weeks, Murphy returned on May 8, but had to shut it down again ten days later, and would miss the remainder of the season save for one cameo at-bat on the season's final day. He ended the '92 season hitting .161 with two homers in 18 games. Needing two home runs to reach 400 for his career, Murphy went to camp with the Phillies in 1993, but was released before the season began. As the Phils embarked on a magical season that saw them reach the World Series, Murphy signed on with the expansion Colorado Rockies. After hitting .143 with no homers in 26 games for the Rockies, Murphy decided he'd had enough and called it a career on May 28, 1993.

Personal Recollection: When I was just starting to follow baseball, Dale Murphy was one of those players you'd love to have on your team. Of course, it ultimately happened. Unfortunately, his best days were long past by the time he wore a Phillies uniform. I guess I was a little too young to be overly critical of Murphy, it just always seemed cool he was playing for the Phillies. Murphy was also known for being a devout Mormon, which seemed to clash with the Phillies of the day, as the seeds for the eventual Macho Row 1993 team were being planted. In John Kruk's book, I Ain't An Athlete, Lady, he has a lot of good stories about always trying to get under Murphy's skin. Though Murphy would often get angry, Kruk felt that deep down Murphy enjoyed being treated as one of the guys after being tiptoed around for much of his career in Atlanta. The Phillies did play on that squeaky clean image, though, most notably when they gave away a "Dr. Dirt and Mr. Clean" poster featuring Murphy and Lenny Dykstra. The interesting thing about the Murphy trade is that the Phillies got the better end of the deal, and not because of Murphy. Tommy Greene was thrown in, and he would win 13 games in 1991 while throwing a no-hitter. Then, in 1993, Greene went 16-4 for the NL Champs and got the win in the NLCS clincher against the Braves.

As far as on-field performance, I would say my best memory of Murphy would be when he hit an 11th inning walkoff grand slam against the Cubs during that amazing and somewhat inexplicable 13-game winning streak in 1991. Murphy was kind of cursed in his career, as he just missed out on a lot of team success. The Braves struggled for the majority of his years in Atlanta. He was traded to the Phillies during the 1990 season. The Braves came out of nowhere to win the NL Pennant in 1991 and would participate in every postseason through 2005. We know what happened with the Phillies in 1993. While there was no 1994 postseason, the Rockies won the NL Wild Card in 1995. I think a lot of people would tell you, if anyone deserved to be part of a winner, it was Murphy. He never got to play in a World Series and a sudden, sharp decline will likely cost him a spot in the Hall of Fame, but all in all, Dale Murphy had an excellent career. While he wasn't nearly the player he once was, I would still say we were pretty lucky to have him around for a couple years.

That's my story on Dale Murphy. Feel free to share yours.
Posted by Ricky Jordan Fan Club at 10:41 PM