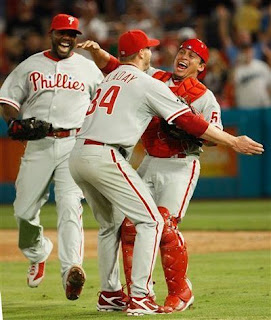 Since the Phillies played a day game on Monday, I had some free time to check out some of the other action MLB had to offer. I tuned in the MLB network figuring the big story would be A-Fraud’s chase to 600 HR’s. (BTW a rough estimate has him at 254 juice free bombs) Instead, it was the dual No-No in St. Pete and Adam Lind was a triple short of the cycle north of the border. Score one for the good guys.  For me, it’s too hard to get excited about the possibility of a cycle until they get the triple. So when I found out the Rays and Tigers game was on ESPN I flipped over. An inning latter Max Scherzer self imploded with walks and then gave up a long ball losing the no hitter, shutout and bllgame with one swing. No fear though, Garza was still working on one too. And he never let up, and completed the fifth no hitter of the season; a season that has started to be called the year of the pitcher,
OK so now to my point, has pitching become so much better than hitting? Is it just a fluke that there have been 5 no hitters and a slew of other games were near misses? Some experts would lead you to believe it’s that the pitchers are just further ahead on the non-steroid learning curve. That they have adjusted better to playing without the chemical help.  That may be possible, but I offer a different opinion. Hitters are impatient and lack fundamentals. The pitchers, not named Roy Halladay, that have thrown the no hitters this year have a combined career record 147-145 and that’s with Ubaldo’s 15-2 mark this season. Frequently, you’ll hear that the key to winning is making the starter work and getting into the bullpen. Hitters, simply, aren’t making pitchers work. They aren’t hitting they are HACKING.  Jamie Moyer became the oldest player ever to throw a shutout when he tossed a two-hitter verses the Braves.  I’d think you’d want to make a 47-year-old WORK, yet Moyer had a three pitch inning.  That’s kind of amazing, but now factor in that inning was one of the innings the Braves got a hit and its ridiculous.
Everyone has their own strategy on how things work the best, like the guy who goes to the bar and hits on anything that moves (see JP circa 1994). Sure it works sometimes, but for just so long then the trannies start migrating his way, ya know?
Jay Wrizight
Posted by BL Chris at 8:59 AM