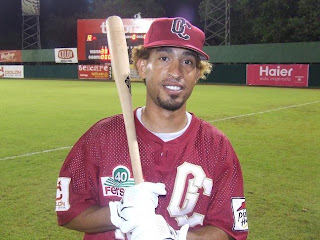 You know its September when the Rally Towels first see the light of the stadium lights at Citizens Bank Park.  It has become the norm to see the ushers handing out the white rags who’s lint works wonders for my allergy overcome nasal passages.  I had tickets for Sunday and Monday’s games. As I left the house on Sunday, I thought about how that day’s game would be kind of passé as Monday the “playoffs” versus the Braves would begin.  Sure, Sunday’s game was special with Werth’s walk-off, but the difference to the atmosphere on Monday was night and day or day to night as the case may have been.  Monday, the crowd was in rare form. Going nuts on double plays. Standing on 2 strike counts begging Hamels to strikeout the Braves batter.  But one thing was missing. Something that has that been there since 2006… “M-V-P! M-V-P!” chants.
The last time the Phillies didn’t have someone finish in the top 3 in MVP voting was the 2005 season when Pat Burrell finished a distant 6th. Injuries have played a major factor as former winners Jimmy Rollins and Ryan Howard and perennial candidate Chase Utley all spent considerable time on the disabled list. So I ask the question: who is the Phillies 2010 MVP?
Halladay, Hamels and Oswalt have all been spectacular. Phillies writer, Todd Zolecki, wrote a column asking if they are the best top 3 in team history. It shows a lack of Phillies history to even ask this question.   But they are starting pitchers and only pitch every fifth day. (Oswalt’s prowess in Left earns him a few more points but his time in Houston is a deterrent.)
Ibanez and Werth have both put up decent numbers, but ho-hum numbers compared to what they are capable of or what we expect from them. The Bullpen has had its moments both great and disastrous. There are no candidates there.  Polanco has been Polanco (i.e. consistent, and dependable.)
Which leaves us with Ruiz and Valdez and I don’t say that like it’s a bad thing. Ruiz has always be recognized for the way he handles the Phillies pitching staff and his ability to make the relievers, especially Lidge, confident he will block any ball in the dirt.  I always thought the 08 World Series MVP trophy could just as easily be sitting on a mantle in Panama. Then again in 09, Senor Octobre proved he is a playoff BEAST!  2010 has proved Ruiz can produce offensively in the regular season as well. He has hit .296 with 8 homers and 50 runs batted in despite spending a stint on the DL. Once again, Ruiz has demonstrated he is a clutch hitter and thrives when the game is on the line.
Valdez’s production has made people, at least in Philadelphia, think Wilson not Exxon. Merely a signing to fill out the Iron Pigs roster, it took injuries to Rollins and Juan Castro to get Valdez in the line-up. Valdez responded by providing excellent defense and some timely hitting. He has more than doubled his career totals in hits, doubles, homers, and RBI’s. If he gets one more triple or stolen base, you can include those categories as well.   That is career TOTALS not career bests. He played so well the Phillies cut Castro and he has also stepped in to fill in at second and third as well.
I’d give the edge to Valdez because the Phillies have gotten so much more from him than they ever expected, but if you say Chooch I won’t argue either.  Maybe on Saturday, at the last Drunk Phils Fans’ regular season outing of the year, an “M-V-P” chant can get going for Wilson and maybe one for Chooch as well.
See ya at the ballpark!
Jay Wrizight
jaywrizight@yahoo.com
Posted by BL Chris at 12:39 PM