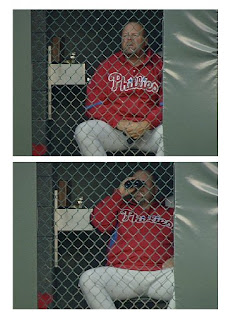 Jimmy Rollins once said, “We’re the team to beat.” But what I want to know is have the Phillies become THAT team? I don’t mean the team to beat, that much is obvious. But have the Phillies become a team that people hate for the sake of hating? I hate the Yankees for no better reason than “Just Because.” The Phillies have no real rivalry with them. It is difficult to say if other cities feel this way about our beloved Fightins but let’s take a deeper look.

Exhibit A: We get any player we want.
Comparison: Yankees sign Sabathia and Teixeria.
Analysis: Sure, in the past few seasons, we have gotten the top pitcher available on 3 separate occasions. The major difference here is that the Phillies have used their abundant minor league system to make trades as opposed to just throwing money at free agents.
Verdict: Not Guilty.

Exhibit B: An unsightly coach
Comparison: Bill Belichick’s ratty sweatshirt.
Analysis: While Charlie’s penchant to have a hand in his pants is somewhat uncouth, the man has survived a heart attack, quadruple bypass surgery and cancer. I think he has earned the right to enjoy himself. Where as I’m sure some NFL approved apparel company could produce a sweatshirt comfortable enough to be donned on the sidelines without the assistance of a pair of scissors.
Verdict: Not Guilty.

Exhibit C: BinocularGate
Comparison: SpyGate
Analysis: The Phillies were only given a stern warning as opposed to a heavy fine and forfeiture of a first round pick which was bestowed upon the Patriots. Obviously, there is no definitive proof of cheating on the Phillies part, but their batting average is 24 points lower, runs are down over a run per game and home runs are also down after the scandal unfolded.
Verdict: Guilty.

Exhibit D: The number of “Phillies” Fans in opposing cities.
Comparison: The number of Yankees or Red Sox Fans in opposing cities.
Analysis: It has always been a pet peeve of mine when people who were born and raised in Philadelphia root for any team from a different city. Since the Phillies won the World Series, the number of “Phillies” fans in attendance for road games seems out of control. I know that Phillies fans have always traveled well and it makes sense it would increase somewhat after winning, but without fail there more than a few Phillies jerseys and caps whenever you see a camera shot of the stands. I wonder if the accessibility of top notch (or camera friendly) tickets thru sites like Stub Hub have just made it seem this way. I saw Scott Fischman, a poker pro, sport a Phils cap during a tournament. I came to find out he was born and raised in the area.
Verdict: Hung (like BL Chris) jury.

The Overall Verdict: Deadlocked Jury.
Right now I’d say the fact the Phillies have over 10,000 professional losses and only 2 World Championships in their history they get the benefit of the doubt, but we are only another World Series berth and a Jimmy Fallon movie from being on par with the Red Sox.

See ya at the Ballpark.

Jay Wrizight
Posted by BL Chris at 8:45 AM