The Worst Strike of All 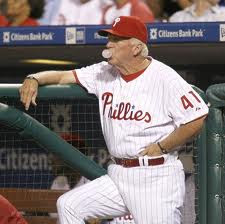 There is a good chance the 2011 NFL season could be in jeopardy.  I know what you’re thinking, and you’re right.  Jay Wrizight doesn’t give two shits about football. But one comment made me think.  Brandon Marshall said if there is no football he simply will take his talents to the NBA.  After I finished clearing my nose of the hops and barley I shot through it as I couldn’t contain my laughter, I pondered what the Fightins would do if baseball went on strike.
Charlie Manuel.  Uncle Cholly would go into retirement and enjoy every minute he could have his hands down his pants in peace and quiet.
Carlos Ruiz. He’d open a Baskin Robbins franchise in his homeland of , but his “taste tasting” will severely hurt profits.
Danys Baez. He’d make gay porn. He’s great at sucking.
Jayson Werth. He’d become an ambassador of Locks of Love. I think he has a hair fetish.
Darren Daulton.  Regardless, strike or no strike, Dutch is trying to use up his frequent tanning card before 2012.
Wilson Valdez. The Phillies handyman would open his own Handyman business. His gimmick would be a 2 for 1 special also known as the “Double Play Special”
Chase Utley. Everyone knows he’s tough as nails and a competitor in every sense, so a move to MMA seems natural. He will get caught in an armbar, but refuse to tap. Of course he will return to the cage before his scheduled timeline.
Ryan Howard. Unfortunately, Ryan will fall back on his Subway endorsements. Jared will get jealous. Things get heated. Jared is a pussy. Ryan gets 15 to life.
Jimmy Rollins.  He’ll continue his relationship with Red Bull, and become the Travis Pastrana of the black community.
Cole Hamels.  The time off allows him and Heidi the time to adopt African children.  It will take Heidi 12 years to realize Cole has no interest in doing this.
Roy Halladay. He’ll become the most famous cricket player ever. EVER.
Shane Victorino. Shane returns to and open a baseball academy…when he’s not sporting his Silver Star shirt and rooting for Chase Utley in the cage.
Mick Billmeyer. He’ll drink and chase broads. Kinda like BL Chris of the Drunk Phils Fans.
Jose Contreras. He will make his money in appearance fees on the talk show circuit as he comes clean and reveals that he is actually 63 years old.
Tom McCarthy. I refuse to dignify this one as it would mean I actually give a shit what would happen to him the second he is no longer a Phillies announcer.
Reuben Amaro.  He will work security at Citizen’s . He will have his hands full as his old friend, Ed Wade, will continue trying to take anything Phillies back to even if it’s done illegally.
Of course, I’d much rather have the Fightins fighting on the diamond than in the ring or commercial sets but if this does happen I’ve already told  Brad Lidge to stop by and take my belts and shoelaces.  He’s a good dude.
See ya at the ballpark.
Jay Wrizight
jaywrizight@yahoo.com
Posted by BL Chris at 8:31 AM