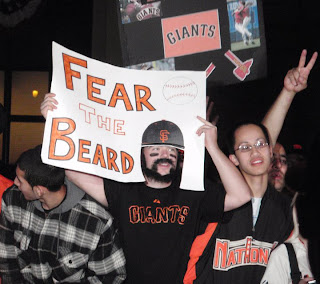 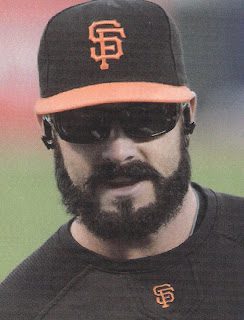 It has been somewhat accepted by supporters of the Fightins that Jayson Werth won’t be wearing a Phillies uniform next season. Thus I fully expect as the Phillies march on towards their third consecutive trip to the World Series that the Citizens Bank crowd will resemble a lumberjack convention more than a baseball crowd. To pay homage to one of the main contributors the Phillies dominance the past three seasons. To continue traditions people have engaged in the past few playoff runs. Beards are cool. I know people who have gone as far as nicknaming their facial Astroturf. (I won’t mention names, but BL Chris can attest to the truth of this statement.) Beards are fun. My dad has had a beard ever since I can remember. Poppa Wrizight is a super cool dude so it’s not with some deep seeded childhood resentment that I say this:

Why? Brian Wilson and the rest of the unoriginal fans on the West Coast. When Giants relievers and fans alike realized their team had the offensive talent that rivaled the musical talents of Justin Bieber, they just assumed it be cool to still our gimmick, Fear the Beard. BarkTees have been selling J-Dub Beard shirts since April. I say take your dumbass Rally Thongs and stick them right down your bearded throats.

I know what you’re thinking. We need a way to show our solidarity and support the Phils and I totally agree. I started looking at team photos and watching game footage. I really came up with nothing. Mohawks and mustaches have both been done. I turned my attention to other avenues to look for inspiration. Bull Durham. Major League. I even watched A League of their Own. I still had nothing. Then finally like a Kenny Powers fastball it hit me. Playoff MULLETS!

Mullets are perfect. Both male and female fans can equally participate. Plus it reminds the team its business up front for the real party in the back. Mullets are funner than beards any day.

I’m fucking out….See ya at the ballpark!