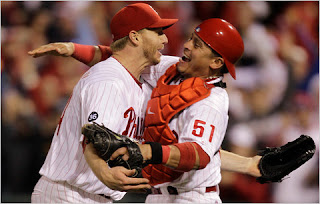 I woke up this morning like a kid on Christmas morning. Bright Eyed and bushy tailed.  This is the 4th straight season the Phillies have made it to the playoffs, but this is the most gratifying. They had to overcome so much to make it to this point. I was offered a wager back in July for fifty bucks. The Phillies just had to make the playoffs. I turned it down without hesitation. First, because the dude is a welsher and secondly, and most regrettably, because I lost hope.
Significant injuries to Rollins, Howard, Utley, and Victorino added to stints on the DL for Polonco, Ruiz, and at some point or another most of the bullpen left me doubting a team that for the previous 2 seasons made me believe they could win any game. Sure they started winning a few games and overtook the Braves but it wasn’t until Werth’s walk-off homer verses the Nationals did I think they had a chance. And the faster than an F-bomb rolls off Chase’s tongue the Phillies were in playoff mode.  The trio of Halladay, Oswalt and Hamels were sick down the stretch. The offense has been kicking on all cylinders including the bench who got to see a lot of playing time since the Fightins clinched early.
One of my favorite stories I always tell is about when I ordered my playoff tickets in ’08.  I was a little short on cash so I waited until the last week of the regular season and knew they were going to make the playoffs to order the tickets. When I called I asked if it was too late. The girl on the phone said,” No, but there’s only seats in the 400’s left” And she said it all annoyed and disgusted. Like I had called during her favorite soap opera and that guy she thinks is so dreamy was on screen. Normally, I’d have told her that guy and the Jonas brothers do things that are reserved for the Mets shower room, but I simply said, “That’s ok. I just want to be there when they win.”  I don’t know if she felt bad for being snotty to me but when I got my seats they were sweet. I sat in the 300’s behind the plate for the first 2 series. And then, first level in the outfield with Eagles Tight End Brent Celek for the World Series. (But that is a different story.)
The strange thing about what I said was that I hadn’t even thought about it first. It just came out.  I did believe it afterwards.  I don’t want to be a jinx, so I’ll just leave it at that.
See ya at the Ballpark!
Jay Wrizight
jaywrizight@yahoo.com
Posted by BL Chris at 8:33 AM