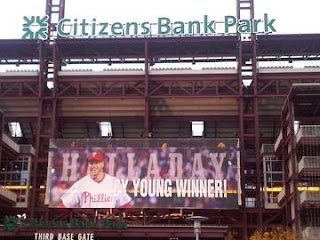 Most of the major awards have been given out this season. We are only waiting for the MVPs of each league, which will be announced next Monday and Tuesday. I am not surprised by any of the results, so there is no need to go into any long discussion of any controversial winners. I do have a few comments that I will share with you, plus a major idea.

-National League Manager of the Year: Wow, that was close. Bud Black beats out Dusty Baker by only one point. I still have a question for Dusty Baker. How come he didn't start Travis Wood during the NLDS? Wood one hit the Phillies in a complete game shutout back in July, with 8 strike outs. Wood ended up coming in the game, that Edinson Volquez started, and was quite successful. Volquez is still not where he was in 2008 because he is still recovering from injury. Sometimes you just got to go with what brought you there. Travis Wood seems to have the Phillies' number.

-National League Cy Young Award: Wow, a unanimous decision! While I fully expected Roy Halladay to win, I did not expect every writer to agree. To me, this makes it even more special. Doc learned about this honor while in Mexico, golfing with Mike Sweeney, among others, so I'm sure that Sweeney was the first to give Doc a hug.

This brings me to the point and my idea. Why are the players getting phone calls on the golf course? Television airs awards shows all of the time, most of them are utter nonsense. Why not have a post season baseball awards show on TV that distributes all of the awards at the same time rather than over a two week span?

New York would be the obvious choice to hold this event but I don't think so. In all fairness, let whatever city that hosts the All Star Game in that particular year, be the host of the award presentation. Any city that has a major league team, surely has appropriate theatre houses. For example, if the event was to occur here in Philadelphia, we could use the Kimmel Center or the Academy of Music.

It would be a festive red carpet event. Black tied ballplayers could show off their sparkly rings, if they had them, along with their sparkly wives in their designer couture. To host the show, my choice would be Hall of Fame broadcaster, Vin Scully. He's the only one left who can call a decent game. If not him, then the broadcaster of the host city.

The first award would be the Jackie Robinson Rookie of the Year Award. Have a former Rookie of the Year present this award or better yet, last year's recipient. The top three or five nominees would be announced while video of said nominees were played on background monitors. The winner would go on stage, receive his award, make a short speech thanking me for having this great idea or his teammates...whatever. If the winner is unable to attend, his manager, coach, or teammate may accept it for him.

I firmly believe that the Rookie of the Year needs to be divided into two separate categories: hitters and pitchers. Last year, JA Happ was deserving, but was overlooked due to the fact the he did not play every day. This year it was Jaime Garcia of the Saint Louis Cardinals. When hitters and pitchers are lumped into the same category, it's usually advantage: hitter.

Next up would be the Louisville Silver Slugger awards. This one could take a while because there would be eighteen winners. Have a former winner who is retired from the game present this award, position by position. For example, Don Mattingly (1985-1987) could present the first basemen their awards. Dale Murpy (1982-1985) could present to all of the outfielders.

Time for a break. We've given out twenty awards by now. How about a little musical entertainment? Bronson Arroyo thinks he plays a mean guitar. Maybe not. Bernie Williams?

The next category is the Rawlings Gold Glove. Just like the Silver Sluggers, there will be eighteen winners. They can also be given out in the same format, from former recipients who are retired from the game. This allows the generations to intermingle. As thrilling as it might be to win one of these awards, just imagine receiving it from a legend, like Mike Schmidt or Hank Aaron. This also allows the viewers watching at home to see some of their childhood heros and reminisce these memories with their children.

The rest of the awards would be given to a member in each league: The Hank Aaron Award, Comeback Player of the Year, DHL Delivery Man of the Year, Manager of the Year, and the granddaddies of them all, MVP and Cy Young.

The Roberto Clemente Award is only given out to one player for commitment to the community and understanding the value of helping others.

Having a special evening for these awards would make it more memorable for the players, their families and the fans. It could raise revenue in the host city from hotels and restaurants. Real fans could attend this special evening. C'mon, you know you would go, given the opportunity. So let's go Bud Selig and MLB Network, get on it.