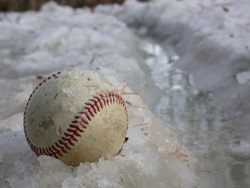 The leaves are falling and blowing in the street. The trees are becoming more bare in each passing day. Oh, and the days are already shorter. We had our extra hour of slumber last weekend. What to do now that baseball season is over.

Most people are already deep into football by now. Not me, it's too barbaric. The players have to wear helmets so they don't get hurt against their opponent. It takes an entire week for their bodies to recover to play another game. No thanks.

Hockey season is also well underway. I remember those special times when Kate Smith sang God Bless America. We were chanting "1, 2, 3, 4, who the hell is Bobby Orr!" Dave Schultz recorded a song titled, "Baby, how long will you keep me in the penalty box?" Why do I still know all of the words to that song? Bad music does that to you. I tried to love the Broad Street Bullies, really I did. It's just too fast for me. I can never seem to follow the puck. It makes me dizzy. It's a total buzz kill trying to find that damned puck, besides, I'm a redhead and don't look good in orange.

That leaves us with basketball. Some prefer college to pro, but March Madness doesn't start until March, and that's when all of the excitement begins. Everyone 'gets' basketball. Mostly everyone has played basketball at one time or another, in gym class at high school or at the local playground. Hell, you got a ball...you can even play with yourself. I used to like basketball but the times and the fashions have changed. Where are they going in those big 'ol drawers? Whatever happened to those tight little shorts that Dr. J filled out so nicely? The buzz kill in basketball: the screeching of sneakers on the wooden floor. The only other sound that is more annoying is Chris Wheeler saying, "No doubles defense."

Let me know what you are up to until pitchers and catchers report in February. Do you watch all sports? Are you a junky for competition? What sport is your true love? Leave me a comment! I tell you about how I got into the Phillies, next time...