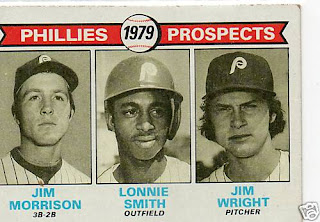 The US Postal service was inundated with mail this week. While most of it was headed towards the North Pole, Jay Wrizight could care less about Kris Kringle. (By the way, thanks for forgetting my Lonnie Smith Flip-down sunglasses, yet again, Fat Man.) I’m most concerned with the ballots which were mailed out to all 10-year members of the Baseball Writer’s Association of America (BBWAA) also known as the Hall of Fame Ballot.
Most years, I’m content with finding out casually who made it in. Unless, of course, a player I’m fond of might be getting voted in. But this year is different. Why? Because we should get a clearer (although not definitive) answer how the writers are going to handle the “Steroid Era.” Joining Mark McGwire on the ballot this year are first timers Raul Mondesi, Juan Gonzalez, Brett Boone, Jeff Bagwell and Larry Walker. Bagwell, Walker and Gonzalez all won MVP’s. All have had whispers about steroid use. And, oh yeah, I forgot the crème of the crop, finger-waving Rafael Palmeiro.
Typically, being a member of the 500 Home Run Club or 3000 Hit Club makes you a lock for . Palmeiro has both. He also has a cycle on his record, but his wasn’t for a single, double, triple and home run. It was for sticking a needle in his ass, when he was suspended for steroids in 2005. Of the 48 members of either club (Palmeiro is one of 4 who accomplished both) Mark McGwire is the only one who is eligible and not enshrined.
Also, I’d like to see if Bert Blyleven finally gets in. In my opinion, he is by far the best player not in the . He fell 5 votes shy last year. His downfall is his W/L record, 287-250 for his career. Some say he is merely a .500 pitcher. Only Nolan Ryan, Steve Carlton, Randy Johnson and Roger Clemens had more in a career.  He ranks 9th all-time in shutouts with 60. Of those who careers started in 1970, his rookie season, or later, Clemens comes closest with 46 or 26th on the all-time list.
Unfortunately, Jay Wrizight no longer gets a ballot as the committee takes exception to doodling Bud Selig and Billy Brewer in compromising positions on the ballot. But if I did here it is (In no particular order):
Bert Blyleven
Lee Smith
Tim Raines
Jack Morris
You may vote for up to ten players.  I, by no means, follow some misguided writer guideline that you cannot vote for a player in their first year of eligibility. I also considered Bagwell, Robbie Alomar, Palmeiro and Edgar Martinez. The “character” issue was why I left Alomar and Palmeiro off. Otherwise, I’d have voted for them. Players have 15 years of eligibility, I have more time for details to come to light and make a better informed decision on whether to vote from them at a later date. While Bagwell may or may not have a character issue, both him and are borderline and I’m not ready say they are hall of famers.
I hope when they have a Bloggers Hall of Fame, Character isn’t one of the criteria as I’d probably be left off the ballot completely.
See ya at the winter meetings!
Jay Wrizight
jaywrizight@yahoo.com
Posted by BL Chris at 2:39 PM