A Couple of Digs for You 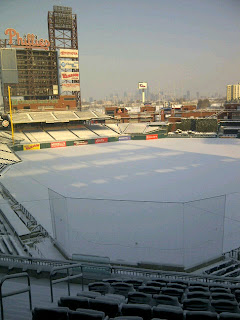 I have been reading the posts and comments from the last week and it has inspired me. Not in the way that you'd imagine because apparently I'm old, so I'll assume that I am wise too. While it is considered impolite to ask a lady her age, I will proudly tell you that i am younger than Jamie Moyer. I have never colored my hair, yet I have no gray. That could be attributed to not having any children or grandchildren, but mostly by keeping assholes out of my life.
Chris told us about the 10 million dollar scoreboard. There is a lot of money being spent beside the players' contracts. We still don't know who will be patrolling right field but that will be revealed by the end of Spring Training. There are positions that need major changes and from your comments I can tell that you agree with me.
This is the last year in Scott Franske's contract. It is imperative that we sign him to a long term deal and put him on television. He is too good-looking for radio, plus he is the best play by play man the Phillies have. Scott is from Texas and the Rangers interviewed him for their tv play by play position. Luckily, since we have him signed through this season, the Rangers had to settle for John Rhadigan. From what I've read, the Rangers fans are not all that excited to hear Rhadigan. I believe that Franske was the top choice by the powers that be.
Since we lost our beloved Harry in 2009, Tom McCarthy has taken over 9 innings of play by play. I had no problem with that for the remainder of the 2009 season. I can't believe that they let the tv/radio lineup to remain the same in 2010. Well it's 2011 and I think we'd best get going on a major campaign to rectify this situation: letter writing, emails, a facebook petition.
The worst part of all of this is Chris Wheeler. He stumbled into his position after the Phillies clinched their first NLE Division title in 1976. I read this in Chris Wheeler's A View from the Booth. I thought I'd give you a little background info in case you weren't born yet. It was the first game of a doubleheader in Montreal. Harry and Richie, being the original Drunk Phils Fans, were unable to broadcast the second game due to some hardcore celebrating. Wheeler got his shot and Phillies fans have suffered ever since.
Franske is the perfect straight man to Larry Andersen's zaniness. They are becoming a legendary duo much like Harry and Richie. I am not comparing them but they are just being their true selves and that is irresistible. Their passion, respect and love of the game and each other is felt through the radio waves. At the very least they need to rotate innings to give TMac and my ears a break. Most fans' solution is to sync their tv to the radio broadcast. That's fine but take it a step farther and let management know your feelings. If they get enough negative feedback perhaps they would rectify the situation.
Wheels has just gotten worse over the years. SHUT UP!!! Do you even breathe? It's a baseball game. There are subtleties and nuances that are not allowed to be experienced due to all of the constant chatter. We all know that he grew up here. He has gotten to meet his childhood idols and he is just so impressed with himself. We get it. Stop trying to impress us. It's not working. Do you think he knows that there are drinking games every time he says, "no doubles defense" ? Probably not, he never hung with the cool crowd. And what is that on top of his head?
Sorry for all of this negativity but a change is long overdue. Please let me know what you think but more importantly let the front office know.

*Snow shoveling tip: for the big dig, take a six-pack with you. Space out each beer individually deep into the snow to keep it cold. Shovel your way to the next beer. Drink and repeat.
Posted by Katie Casey at 12:03 PM