The Franchise Speaks on Obesity 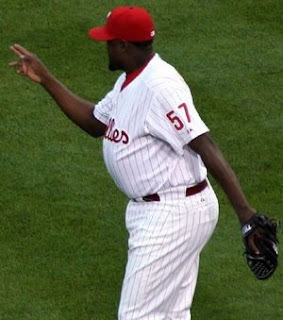 The Franchise despises fat tubs of goo. While The Franchise is drinking his protein powder, these disgusting fat bodies are swilling down soda. Fat people need to do some exercising. They should start with push-aways. The Franchise means for them to push away from the buffet table. I am thinking about making a petition to keep Tom McCarthy off of TV. This guy stuffs his fat face all game with hot dogs, popcorn, pizza, and whatever else he can gets his hands on. So do yourself, your mirror, your scale, and The Franchise a favor and put down Wawa Sausage Sizzli. I don’t have to tell you that The Franchise is 6’ 2” of sculpted steel and sex appeal. You saw my picture. You know this. You guys want to be me and your wives/girlfriends want to be WITH me. Now that I am done my PSA, here is what I want to talk about this week. The Phillies are not the best team in baseball.
I will break down position by position why the Boston Red Sox are the best team in baseball. The Franchise always keeps it real for his fans and haters alike. I will start with Catcher. The Phillies take the nod here. Barely. Carlos Ruiz is better than the Italian Stallion Saltalamacchia in Beantown. Ruiz hit .302 last year. Jarrod is a never will be who hit .158. Phillies 1 – 0.
Gonzalez gets the nod at first base. He is a Mexican, but despite his racial handicap, this guy hit .298 with 31 bombs in a pitchers park of Petco Field. He may hit 45 over Fenway’s short porch in left. Now Howard was close with a .278 average and 31 HRs, but the numbers do not lie. Tied up 1 – 1.
You have to go with Pedroia at second base. He played almost half the games that Utley did and put up comparable stats. Dustin played 75 games, hit .288, had 53 runs scored, 12 HRs, and 41 RBIs. Utley played 115 games, hit .275, scored 75 runs, hit 16 HRs, and had 65 RBIs. Utley needs to spend less time in front of a mirror and more time in the batting cage a la Greg Dobbs. Boston 2 – 1.
Shortstop unequivocally goes to Rollins. It is not even close. I will not bore you with stats. Jimmy is no longer an MVP caliber player, but he is leaps and bounds better than Scutaro. Tied again 2 – 2.
Third base goes to Youkilis in a landslide. Polanco is a nice player, but Kevin puts up huge numbers. The only thing Placido on Youk is hat size. Bosox 3 – 2.
OF is all Boston. They have two outfielders widely ranked in the top 10 for the position. Crawford and Ellsbury are studs and both could be true leadoff hitters. Drew is a jerkoff, but he is still better than whatever slop the Phillies will put out there in RF this year. Boston 6 – 2.
Starting pitching is way closer than you may think. The Philly 5 just nudge out Boston’s tough rotation of Lester, Lackey, Beckett, Bucholz, and Dice K. Boston still up 6 – 3.
The relief situation is not close. I will agree both closers blow. Papelbon and Lidge both had horrendous ERAs for closers. Boston wins because they have an entire back end of the bullpen that were closers and have closer stuff. Bard, Wheeler, and that gelatinous blob Jenks (he got on a scale this spring and it said To Be Continued) are much better than the Phils back end of Madson, Romero, and Baez/Contreras. Boston 7 – 3.

The final category I will use is Coaching/Bench/Intangibles. This is a complete wash. Both benches blow. The Phils have Gload/Mayberry/Schneider/Valdez where Boston has Ortiz/Cameron/Lowrie/Other assorted border jumpers. Boston wins 8 – 4.
The Phillies need to decrease the strikeouts, beef up the bullpen, and upgrade the corner outfielders. Boston better hope their Catcher can handle a pitching staff, because he can't hit a lick. The Franchise could see how you homers could say Howard and Utley are better than Gonzalez and Pedrioa, but the stats show otherwise. The NL is a complete joke. The worst team in the AL East just may be better than the second best team in the NL. So pray for a miracle Phillies fans, because Boston would clean Philadelphia’s clock in a 7 game series (more like a 4 game sweep).
Boom Boom Pow!
The Franchise

-Sent from my iPhone
Posted by The Franchise at 11:29 AM