The Franchise Speaks on Spring Training... 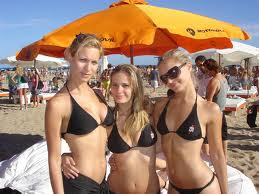 While all of you saps are sitting back in Philly dealing with 40 degree weather, rain, snow, wind, piss, shit, and corruption...The Franchise is living it up in sunny Clearwater, Florida. As I am writing this, I have a Whipped Creme Vodka and Cream Soda drink in one hand, the view of the Gulf of Mexico and tons of bikini clad broads in his eyes (The Franchise is probably in these chicks eyes as well), and a game to see at 1 o'clock today. I want to give a shout out to my man BL Chris, who set me up down here as the DPF representative for Spring Training. To be honest, I don't know if I am even going to make the game today. There are all these girls on Brajole Patrol and The Franchise is willing and able to make one lucky ladies day and night. All night. Now I don't want to get my female readers more hot and bothered, so I will chose to move on...

I wanted to make some predictions today about the upcoming season. Not the usual how many wins nonsense, but more in depth predictions on stats, DL bound players, and do a Cy Young/MVP for the Phillies team themselves. I will start of talking about some stats.

I see there being two 20 game winners on the Phillies staff this season. Cole Hamels and Roy Halladay. Hamels was ridiculously good down the stretch. In his last 16 starts, he posted a 2.07 ERA with 107 strikeouts while allowing just 25 walks and seven home runs in 104 1/3 innings. Roy will be Roy and have a great season. I see him with a 23-7 record. He works as hard at pitching as The Franchise works on his abs. He is a true professional that can be counted on every 5 days to give you 6 plus innings of stellar work. The knock on Cole was that he was a two pitch pitcher. He has developed and refined his cutter that will elevate his game to the next level this season with a 25-6 record, sub 2.50 ERA, and close to 300 K's. Even though his wife is a skank that The Franchise wouldn't even look twice at, Hollywood Hamels is the real deal(OK...I'd throw one in her if I was all Jager-ed up).

Many people talk about Rollins having a MVP type year since his contract is up. This guy is just too selfish and ego-centric to be a team player and do what is required of a lead off hitter. (The Franchise knows his own). Rollins has had a combined .304 OBP over the last two seasons. He loves popping up the ball more than I like mirrors. The MVP of the Phillies will be the man who manages the pitching staff and will hit over .280, knock in 60 plus runs, and throw out better than 50% of attempted base stealers. The one and only Carlos Ruiz. The Franchise is a big Pana-maniac.

People who will spend time on the DL : Ibanez, Polanco, and to no ones surprise, Cliff Lee. Everyone is on this guy's yam bag, and he did have a great 2009 playoffs, but he was mediocre at best for us in the regular season. He was 7-4 with a 3.39 ERA in 2009 for the Phils and 4-6 for the Rangers with a 3.98 ERA last year. Get him to the playoffs and he is Sandy Koufax, but his regular season numbers are more similar to Teddy Higuera.

I would go on, but right now this beautiful honey baby just took the lounge chair next to The Franchise and I am about to have her get me a drink and ask her what she plans to make me for breakfast tomorrow morning. Sweetheart, you can't be the first, but you sure can be next!

* Special Thanks to Candy(Lunch) , Tiffany (Dinner), and Ashley(Dessert) for posing for The Franchise

Posted by The Franchise at 9:53 PM