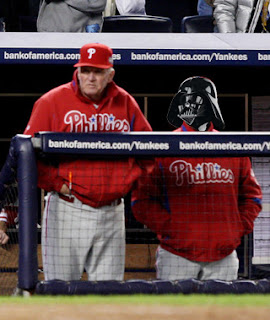 Hey, I'm Miiiiiike, the newest writer at Drunk Phils Fans.  I have seen the good Phillies teams from the late 70's to the early ‘80s. The mediocre to bad teams of the late 80's and early 2000‘s (except for the wonderful blip that was '93) was painful, but now we get to watch the greatest Phillies teams in their 128 year history.  It’s been a bumpy road.  I thought 1980 was wonderful with all four Philadelphia teams making  it to their respective finals.  My seven year old mind thought “this is great and I can’t wait for this to happen every year.”  Boy was I wrong!  I once had to explain to someone who grew up outside of Philly, how huge it was for the Phillies to win the World Series in ’08.  I told them it had been a hundred seasons.  Let me repeat that…  A HUNDRED   since a Philly team had won a championship.  New York, Chicago, Dallas, and L.A. all won multiple championships in that time.
I think everyone reading this realizes that this is a great and unique time in the Phillies team history.  My Dad used to say how agonizing it was to go through the collapse in ‘64.  Now we can tell our kids how we saw 4+ years of great championship baseball in Philadelphia and the best starting rotation EVER!
Starting at the beginning of the season I’m going to bring, The Legal Opinion, a weekly recap of the Phillies action and other interesting happenings in the majors.  Not only will I bring some stats, but my thoughts on how the team is doing and where they are going. We all know where it’s going to end, but let’s not forget, the journey is more important than the destination.
One thing I would like everyone to do is, since group is called The Drunk Phils Fans, give the rest us your best Phillies themed drink or what you like to drink when watching the Fightin‘s.  When you submit a drink, don’t just give us a name, but also the recipe.  For instance, See-Through’s - a Gin and Tonic (Harry‘s favorite) or an I Heart Chase (from ALFA American Tavern)  - 1½ oz of  Gin, 2 oz of Cranberry Vodka, Sour Mix and ice. All of us that have been to a Drunk Phils Fan event know the official unofficial  beer of DPF is Miller High Life with Jameson whiskey, but I want you to come up with your most creative and fun concoctions we all can enjoy.  Just to get everyone started let me throw out some names and have everyone come up with the recipes:

An Outta Here
A Phanatic Phizz
The Vet
I’ll post the best and give you the credit.  From time to time I’ll give some rants, such as “Why did we always get the other brother?”  or “Did we really have that guy and let him go?”.  Thanks and I’ll see you throughout the season.

Written by Miiiiiike
Posted by BL Chris at 2:51 PM

Email ThisBlogThis!Share to TwitterShare to FacebookShare to Pinterest
Labels: Miiiiiike