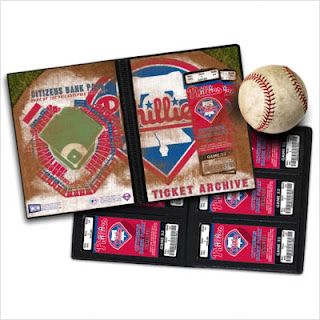 Well, we're finally getting a look at the 2011 version of the Philadelphia Phillies in Clearwater, Florida. This Spring Training all eyes are on the Phillies due to December's surprise Free Agent acquisition of Cliff Lee. On February 14, the day that Aces and Chooches were to report to camp, Brighthouse Network Field was invaded by the media. Not only were the usual local suspects there, but the national media were present, including ESPN, Fox and various print and Internet representatives. It was standing room only for the press conference with the starting rotation.
Speaking of standing room only, it seems that it will be the only way that some fans can attend games at Citizen's Bank Park. Fans are complaining all over the web, including the Phillies site, that they can't get the tickets to certain games. Please. Are you new here? The Phillies sold out every game for the entire season last year following the last half of 2009.
Let me start by saying that I have been a 17 game plan season ticket holder since 1990 where we could spread out and relax at the Vet. My plan is during the week so my weekends are free to go down the shore or attend to other social obligations. There is a plan that is for Sundays only. They are mostly day games and have give aways geared at children under 14, with the exception of Mother's Day and Father's Day. There is no way that I could be out in public that early after Saturday night, in the blazing sun with screaming brats. Most of these Sunday packages are the first to sell out due to the give aways.
You have to hand it to the Phillies Marketing Department. In those final empty sad years at the Vet, they started having more give aways during the week. The firework games always sold out. These games are to be avoided at all costs. These are the games the amateurs attend with their entire family. They walk around aimlessly and don't get me started on the parking. This is the only game of the year that they go to and they go every year. While the firework display is magnificent, the aftermath is excruciating. Other than Playoff and World Series clinchers, this is the only time that the entire venue departs simultaneously, and remember, they're amateurs.
Dollar Dog Night is another fan favorite for some reason. While I'm not opposed to hot dogs, I don't care for beef franks which is what is served at CBP. These nights are overrun by young guys, high school - college aged, who are usually drunk and/or low on funds. They have their competitions to see who can eat the most $dogs. Good for them. They're just having fun, boys being boys.
I'm not even going to get into the Bobbleheads, but the increase of week night promotional items, the CBP experience and a championship team will probably continue to sellout CBP this season. Those kids from the 700 level with their Schil-o-meter and their flotillas are now grown. They were there during the lean years, hanging with their buds and enjoying the game. Do you really think they cared about a freebie?
My point here is not to dis the free shit. The quality has improved over the years. It's about the casual fan bitching about not being able to get tix to "premium games." The Phillies are selling six packs and three packs that would include such games, but only one. These particular fans are whining because they can't go to the Mother's Day game, Firework Night and the Fan Appreciation game. These fans are a step above Bandwagon fans. Whatever happened to just enjoying the ballgame? We have one of the best ballparks in all of MLB, top rated food and a championship team that may be the best in their history. Why do they need anymore incentive to go to a game?

*FYI: A good option for Firework Night is to go to the Philadium on Packer Ave. Good beer selection for a tiny corner bar and great food. Huge menu with tasty mussels and bread for dipping. I highly recommend their cheeseburgers, 1/2 pound homemade, served on a kaiser roll. Get a good load watching the game on their big TV, have a burger in the seventh, grab a six pack to go in the ninth and head down the Lakes to watch the Fireworks. Hop back in the car and beat the traffic home.