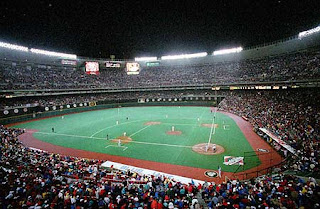 I remember it like it was yesterday.  The date was May 7, 1984 and the Vet seemed empty that day as only 17,000 were in attendance. The Vet was always empty unless it was a playoff game.  Marty Bystrom was on the mound for the Fightins’ as they battled their now NL East rival Atlanta Braves.  Schmitty was 0 for 3 that night, but Von Hayes belted 2 long HR's.  Before then, I had been to many Reading Phillies games, but this was my first trip to South Philly to see the “Big” Phils.  I was eight years old.

The Vet was no Comiskey, Fenway, or Wrigley, but the Vet had character.  The Vet wasn't glamorous, but it was our house.   The Vet was home to the likes of many great players that didn't care if their uniforms got dirty.   Nails and Charlie Hustle just to name a couple.  These players put everything on the line for their team and city, night in and night out.  They slid head first into second and took out catchers when coming home.  If they were trying to catch a deep shot to center field, and the wall was in their way, they would run right into it, but they would still not drop the ball.  It was qualities like these, that made me a lifelong Phillies fan.

Fast forwarding to October 13th, 1993.  It was game 6 of the NCLS and the opponent, oddly enough, were the Atlanta Braves.  Again, I was with my father but the Vet was a little more full that night as each and every one of the over 62,000 in attendance were hoping for the same thing- Phillies win this game and they go to the World Series.  Our seats were very close to ones we always had for Eagles games, in the 700 level and as we climbed the ramp, the smell of urine and marijuana got stronger and stronger.  The Phils were victorious that night and went on to the World Series, but unfortunately as you all know, did not win.  15 years later they returned to the Series and finished what they started.  The Vet was gone, but its character still remained.  Instead of “Nails”, we now have “The Flying Hawaiian”.  Instead of “Wild Thing”, we now have “Lights Out Lidge”.  The players and stadiums may have changed, but the fans will always remain the same.