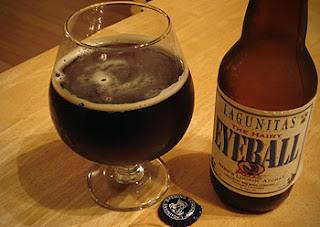 JMurl's Microbrew of the Week
Lagunitas Hairy Eyeball Ale
Brewed by: Lagunitas Brewing Company/Petaluma, CA
Abv: 9%
Copper and red hues...fabulous aromas of prunes, brown sugar, and rich malts...full bodied, slight abrasive hop coarseness...a one of a kind...4 out of 5 burps
Rating system:
5 burps- The cream of the crop...your taste buds will thank you
4 burps- Good brew, but not the crème de la crème that would get 5 burps
3 burps- Okay, but “I'm not a big fan” and its got alcohol in it, so I'll drink it
2 burps- “Do you have any Bud Light instead of this?”
1 burp-   This brew sucks so bad, it make you want to run to the closest AA meeting
The definition of a “sleeper” is a lower-ranked player who come through and outperform their draft-day value.  In many cases, finding the right sleepers at the draft can go a long way toward winning a title.
Here are JMurl's top fantasy sleepers at each position:
Catcher
Mike Napoli (Rangers): Questions about playing time and his batting average will keep his draft stock low, but despite always splitting time, Napoli has more home runs over the past three years than any other catcher.

First base
Ryan Howard (Phillies): It's important to realize that Howard is no youngster; he has been in the league for seven seasons now, five of them with 500 at-bats or more. Howard is still worth a third or forth  selection with the overall numbers that he provides. Just be prepared to absorb some K's with his long swing and he will have to carry the load with Utley out of the lineup early in the season.
Second base
Tsuyoshi Nishioka (Twins): He would be a lot more attractive if he ended up at shortstop. Regardless of position, he is a guy who will hit for average, steal 20 bases and score runs, which is what your want from your middle infielder.
Shortstop
Ian Desmond (Nationals): Where does the better value lie? Is it with Desmond as a double-digit rounder (13th or 14th round, most likely) or with Derek Jeter, who will go in the sixth or seventh round? Desmond's numbers were almost identical to Jeter's in 2010. Snag Desmond late if you get shut out of top shortstop options.
Third base
Casey McGehee (Brewers): June 1, 2009, is about when McGehee became a full-time starter. From that date through the entire 2010 season, only Alex Rodriguez has more RBIs among third basemen. McGehee hit .293 over that time, is sixth in homers and ninth in runs. Here are his totals from that date: 927 at-bats, 123 runs, 39 home runs, 167 RBIs, .293 average. Here's Evan Longoria over that same time frame: 959 at-bats, 158 runs, 42 home runs, 162 RBIs, .279 average. Just saying.

Outfielders
Colby Rasmus (Cardinals): Rasmus is in a for a huge breakout season, whether he commits to being a power guy or not. His numbers have increased as a whole over the past two seasons in a similar number of at-bats.
Drew Stubbs (Reds): Hitting 22 homers with 30 stolen bases in your first full season is quite the feat. A few years ago, those numbers got Grady Sizemore pegged as a top-five outfielder. Stubbs will come at a much larger discount.
Jason Bay (Mets): Sure, his first season in Queens was a disaster, but if he's healthy, he still has the talent to produce, even in Citi Field. It's still best to take him late, which is quite possible given how the bottom fell out last year. This of course if he comes back from his recent setback.
Pitchers
Matt Garza (Cubs): For reasons I don't quite grasp, Garza isn't being granted the usual AL-to-NL benefit of the doubt that most high-skill pitchers get. This isn't Jake Westbrook. This is a guy who has posted a sub-4.00 ERA for four consecutive years in the AL East. By way of comparison, Josh Beckett has accomplished that feat in only two of his five seasons in the division. I see Garza jumping back to the 7.5 K/9 range or better and carving up the National League for a career-best WHIP in sub-1.20 territory.
Javier Vazquez (Marlins): His 2010 campaign in the Bronx was a nightmare, but two years ago, Vazquez got Cy Young votes. He's back in the National League, in a pitchers' park, and probably not being drafted in most leagues. All we need is 12 wins, a sub-4.00 ERA and 175 strikeouts, numbers reachable even in decline, and he's a top-50 starter.
Leo Nunez (Marlins): Among closers, Francisco Cordero has long been the poster child for the "mediocre skills, great job security" closer. Nunez could be the new version of that model, but with far better skills. A 9.8 K/9 and 2.9 BB/9 are a devastating combination, and even if Nunez falls off a bit from those marks, he should do well enough to save 35 games and hold on to his job for the entire season.
Posted by BL Chris at 8:11 AM