This is a letter from Ed Rendell to GQ magazine. It was originally posted on philly.com and I just thought it was appropriate to repost on the blog. 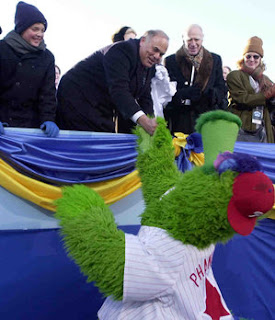 DEAR MR. NELSON:
So, here we go again.
Another national publication resorting to tired clichés and jumping on the "throwing snowballs at Santa" bandwagon to describe Philadelphia sports fans.
In the current issue of GQ magazine, you ranked the 15 worst sports fans in America, and in a tie for the title of worst in the nation you selected the fans of the Eagles and Phillies. Your magazine described them as the "meanest fans in America."
The "worst fans"? "Meanest fans"? I've been following sports in this town for years, since I came to Penn. Jim, you and your magazine took the easy way out. And you have it all wrong.
To support that contention, you say the fans have booed everyone from Santa Claus to their own star players, and that they cheered Michael Irvin's injury. You also referenced a recent horrendous incident in which a drunken fan deliberately vomited on an 11-year-old girl. Lastly, you quoted Pete Rose about the fans booing the crack in the Liberty Bell.
Let's examine your evidence:
First, the Santa Claus incident was more than 40 years ago - there are very few of us left who pelted that forlorn, scrawny Santa, and certainly current fans cannot be blamed for that. Second, it is true that, on occasion, some of our fans have booed our players but the vast majority are incredibly supportive. The vomiting incident was horrible, but it was one incident perpetrated by only one fan. As for Pete Rose, when he came here to play, he found the fans to be very supportive (we love and appreciate hustle and effort) and has developed a special, lasting relationship with this city's fans.
You want to talk about evidence to define Philadelphia sports fans? This is a city where fans' intensity, passion and excitement can actually dictate the outcome of events. There is no doubt in my mind, because I have seen it:
* Ask Burt Hooton about Game 3 of the National League Championship Series in 1977. In the second inning, Hooton was unmercifully booed at Veterans Stadium as he disputed balls and strikes and delayed the game. The louder it got, the wilder he got. Four consecutive walks later, the Phillies had the lead and Hooton was out of the game. That would not have happened anywhere else.
* Or how about that Eagles-Cowboys game in 1995, when Dallas coach Barry Switzer called the same play twice. The Cowboys lined up on fourth-and-a-short-1 at their 29 in a tie game in the fourth quarter. Even the Eagles players looked as if they thought the Cowboys would get the first down. The Eagles stuffed the Cowboys, but the officials ruled the 2-minute warning came before the play. The Cowboys lined up again. The fans continued going crazy, as only they could in the Cowboys game. The players' body language changed. All of a sudden, they became defiant. They stopped the Cowboys, got the ball on downs and won the game on a field goal. It was stunning.
* Or, Brett Myers working a walk off the Brewers' CC Sabathia in Game 2 of the NL Division Series in 2008, thanks to some help from the crowd. With every pitch to Myers, the fans further helped unnerve Sabathia. Myers walked, Jimmy Rollins walked on four pitches, and then Shane Victorino hit a grand slam.
Yes, there are a few isolated incidents of bad behavior by Philadelphia fans, but some have been misconstrued by the national press, such as the fans booing Donovan McNabb's selection on draft day (they weren't booing McNabb, they were booing the Eagles for not choosing Ricky Williams).
But, consider the following incidents committed by other cities' fans:
* Jets fans boo their team's draft selection not only 1 year, but every year. The national and New York press never mention that.
* In 1986, a Yankees fan threw a knife at the Angels' Wally Joyner, grazing his arm.
* In 2010, some Yankees fans in the stands harassed the wife of then-Ranger Cliff Lee.
* In 2002, two White Sox fans jumped out of the stands and attacked Kansas City Royals first-base coach Tom Gamboa.
* A year later at a White Sox game, a fan ran onto the field and tried to tackle an umpire. Later that year, Cubs fans threw a cellphone that hit San Diego third baseman Sean Burroughs.
* In 1999, Denver fans threw snowballs with batteries in them at Raiders players.
* In 2003, Oakland fans hit the Rangers' Carl Everett in the head with a cellphone. Later that year in Oakland, another Athletics fan threw a cherry bomb from the upper deck and burned an 8-year-old boy.
* In 2003, a Giants fan was fatally shot by a Dodgers fan in an argument in a Dodger Stadium parking lot.
* In 2001, Browns fans threw beer bottles onto the field to protest a referee's call. Police had to escort the refs from the stadium.

* In 2009, Dallas Mavericks fans poured beer on Kenyon Martin's mother and Carmelo Anthony's fiancée.
So, the "meanest fans in America"? . . . Not even close.
Booing an emaciated Santa, even booing your own players pales in significance compared with these acts of physical violence. The key fact you're clearly missing is that one can point to isolated incidents of poor fan behavior in almost every city. Unfortunately, again, you chose the easy way out.
Now let's take a look at the other side of the equation. When rating the "worst fans in America," you surely would also have to look at the good things they do as well.
First, Eagles and Phillies fans are incredibly loyal. When the Birds suffered through several four-win seasons, they still sold out. The Phillies have played before 123 straight sellout crowds at Citizens Bank Park. The fans' support is intense and electric. It inspires and motivates players. It literally lifts our teams.
Ask Brian Dawkins, the ex-Eagle now with the Broncos, who are the best fans in the NFL and he will tell you there are good fans in many places, but none like ours. And, Jim, did anyone at GQ listen to star pitcher Cliff Lee when he turned down an offer of more money from the beloved New York Yankees to sign with the Phillies? This is what Cliff had to say about the "worst fans in America":
"You can feel the volume. Every game has got an elevated feel to it compared to everywhere else. It's completely different. I don't know what the fans do to create that much more volume and excitement in the stadium, but it's definitely something extra here. I don't know what it is, but it's something they're doing. They get excited. They're passionate fans. They understand what's going on. They don't need a teleprompter to tell them to get up and cheer, to do that. No, it's exciting."
Lastly, let's talk about the good our fans do. In the last 6 years, Eagles fans have helped raise more than $1.5 million to fight breast cancer and have donated more than 21,000 pounds of food to hunger relief organizations. Not to be outdone, in the last two decades Phillies fans have donated $11 million to help fight ALS, $800,000 last year alone. And incredibly - in what has to be an unprecedented gesture - the fans funded the creation of a 7 1/2-foot bronze statue of the Phils' beloved, now-deceased announcer Harry Kalas and presented it as a gift to the club in Harry's memory.
"Worst fans"? Hardly. "Best fans"? Probably.
Jim, I understand you come to Philadelphia often to dine at Vetri, one of our great gourmet restaurants. Perhaps the next time you come into town you should head down to Pat's Steaks at 12th and Passyunk and give the people of South Philly a chance to talk with you about the article.
Better yet, come with me to the Phillies' Opening Day, and you will feel that passion - that love - that the "best" fans in America have for their teams.
Sincerely Yours,
Ed Rendell
Posted by BL Chris at 9:24 AM