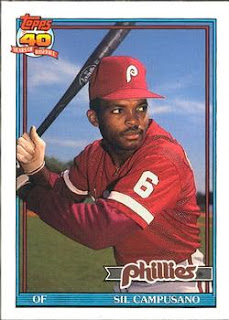 About Sil Campusano: The biggest event of Major League Baseball's offseason is the Winter Meetings. Generally held during the first week of December, these meetings often involve a flurry of player movement or at the very least set the wheels in motion for moves that may occur in the weeks leading up to Spring Training. One of the last orders of business during the Winter Meetings is the annual Rule 5 Draft, which includes both Major League and Minor League phases. In the Major League portion, teams have the opportunity to select eligible players who have not been protected on their previous organization's 40-man roster. The catch, of course, is any player selected must remain on the club's roster for the entire season or they will be offered back to the previous organization. The most notable such selection has been Roberto Clemente, whom the Pittsburgh Pirates drafted away from the Brooklyn Dodgers. Current Phillie David Herndon joined the organization via the Rule 5 Draft. Notable Phillies Rule 5 selections of the past include Dave Hollins and Shane Victorino, who was actually offered back to the Los Angeles Dodgers and turned down. The Phils also notably lost George Bell to the Toronto Blue Jays in the Rule 5 Draft. For the most part, there are many more misses than hits in the Rule 5 Draft, most of whom are returned to their previous organizations and often never heard from again. Then there are some who stick around for the required season, but their impact is negligible. That's where one Sil Campusano comes in.

After being signed by the Blue Jays as an amateur free agent out of the Dominican Republic following the 1983 season, Campusano got his start in pro ball with Toronto's Gulf Coast League affiliate in 1984, where he hit .267 in 63 games. After that rather pedestrian debut, Campusano turned some heads in 1985, when he combined to hit .310 with 40 doubles and 21 home runs in 133 games between the A and AA levels. He'd never really approach that production again, but the Blue Jays thought enough of Campusano to make him their Opening Day center fielder in 1988. He would hit a double off Bret Saberhagen in his MLB debut, but for the most part, Campusano was no match for big league pitching, as he hit .218 in 73 games for the Jays in '88. Campusano would return to the minors in 1989, where he hit .242 in 112 games without a recall to the parent club. The Blue Jays would leave Campusano off their 40-man roster following the '89 season, and the Phillies decided to take a flyer on the outfielder.

Coming off two consecutive last-place finishes to close out the 1980s, the Phillies were obviously in need of changes. They went about doing this by gathering a bunch of players to see who could stick, including selecting two players in the Rule 5 Draft. One of the players was the aforementioned Dave Hollins, a third baseman who had been in the San Diego Padres' organization. Campusano was the other selection. In 1990, Major League Baseball had its Spring Training cut in half due to a lockout. Perhaps this worked to the advantage of Campusano and Hollins, who both headed north with the big club when the season got underway.

History will show Sil Campusano was the Opening Day center fielder for the Philadelphia Phillies in 1990. The reason for this is that Lenny Dykstra had bruised his ribs on the brick wall at Wrigley Field during the originally scheduled opener, which was called due to rain before the game was official. He would end up missing the first four official games of the season, with Campusano taking his place in the lineup for three of those games. When Dykstra returned, Campusano made his way back to the bench and would not start another game for nearly two months. Much like his stint with the Blue Jays, Campusano proved unable to handle Major League pitching. His batting average was south of .200 for most of the '90 campaign before a three-hit game against the St. Louis Cardinals in the season's final week pushed his average above the Mendoza Line, where he'd eventually finish at .212 in 66 games. Campusano spent the majority of the 1991 season back in the minors, save for a three-week midseason recall that saw him collect just four hits in 35 at-bats. The Phillies released Campusano following the '91 campaign. He would never sign on with another MLB organization.

Personal recollection: When you talk about Sil Campusano as a Philadelphia Phillie, it pretty much starts and ends with one at-bat. It was August 3, 1990 against the Pirates at the Vet. Doug Drabek, en route to the National League Cy Young, was mowing the Phillies down. Sure enough, Drabek found himself one out away from a no-hitter. Coming to bat for the Phillies was Campusano, who entered that at-bat hitting a lusty .188, as Harry or Whitey might say. Campusano worked the count full before swinging at a pitch up around his eyes, which dropped into right field for a base hit. I was at that game (the Phillies had commemorated the tenth anniversary of the 1980 World Champions that night), and believe me, I've never gone so nuts in a game the Phils were trailing 11-0. A lot of people may not realize it now, but back when the Pirates were at the top of the NL East, you could liken the atmosphere at a Phils-Buccos game to that of a Phillies-Mets game. While I appreciate great pitching, I don't want to see a no-hitter thrown at my team's expense. So Sil Campusano will always have that special place with me, as he denied Drabek what would've been the first nine-inning no-hitter in Veterans Stadium history. Just twelve days later, Terry Mulholland would be the one to make history at the Vet, as he no-hit the San Francisco Giants. Campusano didn't speak much English, but he understood enough to respond to a reporter's question about Drabek's bid. His answer was simply, "Gone!" Classic.

Another thing I'll always remember about Campusano was his yearbook bio. One of the questions was about each player's sports-related fantasy. Most of the answers were the run-of-the-mill winning the World Series sort of stuff. But for Campusano, he listed "To play softball" as his fantasy. I have to think he didn't quite understand the question. There was a good story about Campusano in John Kruk's autobiography, I Ain't an Athlete, Lady... Kruk mentioned how easy it was for players not familiar with the area to get lost going to the ballpark and cited examples of himself and other players doing so. One such example was Campusano, who lived just across the Walt Whitman Bridge. One day the bridge was closed, so Campusano figured he'd just take another bridge and would be there without any trouble. Needless to say, that wasn't the case. Unfortunately, Campusano's English wasn't quite good enough to ask for directions to the Vet. A few hours and bridges later, Campusano finally appeared and according to Kruk was shaking as he entered the clubhouse. I guess all in all, it was a brief but somewhat eventful Phillies tenure for Campusano.

That's my story on Sil Campusano. Feel free to share your own recollections
Posted by Ricky Jordan Fan Club at 12:37 PM