You'll know where to find The Franchise... 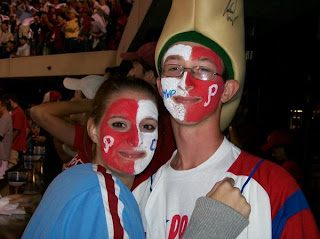 Sitting in the friendly confines of Veterans stadium on a drizzly and cold September day in 2003, the battle-cry rang out through the near-empty venue.

You could see the disdain wash over the already grumpy, but devoted Phillies fans who were holding tough through yet another mediocre season. They were still the lovable tough-luck Red Sox fans, but in a little over one year, they would transform into "those" fans. You know who they are. The ones whose memorabilia collection rises and falls with the team's wins and losses. The ones who give you a bad name.

On the whole, Phillies fans are wonderful. Please don't think I'm blanketing the whole of the fan base with these statements. However, recently more and more new fans are puking and tazing their way to a bad reputation for us all. They're the ones who pop up as our representatives on the national news. They're "those" fans. The ones that other cities love to hate. The cocky, unapologetic jerks who dare you to say a negative word about their team.

Who are these people? People like the picture I added above..Where were they when Francona and Bowa were sleep-walking their way through season after season?

They've been spoiled, but it's really a shame. They've missed out on so much. They'll never know the legendary exploits of Ron Gant, Rico Brogna or Mickey Morandini. They'll remember Lenny Dykstra as a wacky, failed businessman who pals around with Charlie Sheen rather than the enigmatic, juiced-up spark plug that roamed the chaw stained turf of the Vet. Who could blame them? These are special times. We've all lived and died with the team. The recent years seem to be karma for the miserable late 90's, but those years built character. Along the way, we learned to never take it for granted. That's what separates the die-hards from the new kids in town.

This team has made Philly a baseball town again, and that's admirable. The new influx of fans has been great for the city, and when the teams are winning, this is an amazing place to live. We deserve this new winning attitude. No, we're not "Red Sox Nation," but we don't want to be. We're the guys who miss Harry AND Whitey. We're the guys who worried about Scott Rolen's back problems. We're the ones who hope you all stick around for the long haul. If you aren't? Well, that's fine. We'll be waiting to welcome you back with open arms. You'll know where to find us, we've been sitting in the same spot for the last 20 years.