...and now a message from our sponsor. 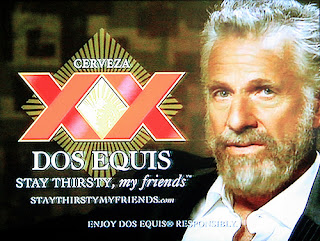 I don't watch a lot of TV, but when I do it's normally baseball. Baseball games are the only things that I watch live. I TiVo regular programming so that I can fast forward through the commercials. My TV is usually set on the MLB Network, which is the best thing invented besides the iPad. That all being said, the only commercials that I normally see are during ballgames or while watching the MLB Network.

My favorite commercial right now is the new Pepsi ad where CC Sabathia comes through the cornfield a la Field of Dreams. It's fantasy. It's magical. Jim Thome is asking for an autograph. Mike Schmidt is representing. Randy Johnson kills a trashcan lid. Ozzie flips. What's not to love? The best part...no Brian Wilson.

I am on Brian Wilson overload. Yeah, I know he's the closer on the current World Series winner, but the year the Phillies won it all did you see Brad Lidge and his ugly mole all over TV? No, and he had a perfect season!
Wilson is featured on the MLB 2K11 as is Roy Halladay. Is it just me or do they run the Brian Wilson version more often? The promotion for the game is to pitch a perfect game, which Halladay has done, in order to win a million dollars.
*I also enjoy the Mike Stanton version with the briefcase handcuffed to him. Yes, I know, I really wish it was me handcuffed to Mike Stanton. He is a hottie!
Major League Baseball has launched a new campaign this season titled MLB Always Epic. They are using this theme to attract younger viewers, replacing their former ads titled Beyond Baseball. King Felix is featured at a carnival game throwing balls at milk bottles. Ubaldo Jimenez is in a gift shop searching for a novelty license plate with his name on it.
And then there's Brian Wilson. He has his own series! They dare you to take a journey inside Brian Wilson's "epic" beard to see what lives inside. Please! Okay, I'll admit it, he does have dreamy blue eyes, but I'm over the beard. So far this season, he is 0-1 with a 8.64 ERA. Epic, not!
So what lives inside Brian Wilson's beard? According to MLB: ninjas, lumberjacks and chicks dancing around the Maypole. We all know what's really in there, crabs. That's right. Crabs that Wilson picked up from sloppy seconds once The Machine was done. Epic.