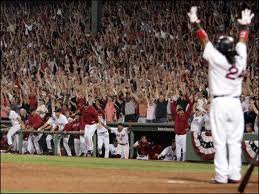 From The Visitorʼs Dugout
By: ʻXʼ

Retired. Quit. Give Up. Cop Out. Classless. Disgrace.

I'm sure all of these words will one day be used to describe the recent exit of one
Manny Ramirez. Last week, according to the always present ʻsourcesʼ, Ramirez was
informed of a positive test for one of a laundry list of substances which have been
banned in baseball for close to a decade. Upon being informed, he elected to end his
career rather than face the 100 game suspension which his second positive test would
have resulted in. In the past few years, a few major baseball superstars have chosen to
retire mid season. But this wasnʼt Ken Griffey Jr calling his manager hours before game
time to say he was midway on a drive home and wouldn't be available for that line-up or
any line-up. It was something even worse. It was an abrupt end to one of the strangest
careers a ballplayer has ever had. An abrupt end for one of the greatest right handed
hitters of all time.

I remember years ago, watching Ramirez pound pitching in the middle of a
loaded Cleveland Indians team. Along with names like Belle, Baerga, Thome, and
Alomar; Ramirez was a rising superstar, a skyscraper in a skyline, in an age dominated
by hitters. Ramirez was rewarded for his astronomical numbers (165 RBIʼs in 1999) with
a gigantic contract from the Boston Red Sox. I still remember the events of that day. I
woke up from whatever beating I had put on myself the previous night and strolled out
into the kitchen. My father was reading the paper...

He proved the old man right. Ramirez had six straight years for the Red Sox of
over 100 RBIʼs and 30 Home Runs. Along with David Ortiz, he made up (arguably) the
most feared 3-4 in baseball since the ʼ27 Yankees. Ramirez won World Series MVP
honors in the Reverse the Curse series of 2004. All the while he continued to be one of
the best Right Handed Hitters of this or any era, continually providing the Red Sox with
another notch in their long line of legendary Left Fielders.

But the whole time there was an underlying problem beginning to bubble. There
was always the ʻunorthodoxʼ style he brought to that hallowed Left Field in Fenway. At
least once a month, Ramirez made some sort of bone-headed play which would be run
again and again on some highlight show. The clip of him cutting off Damonʼs throw a
mere 20 feet away will most likely be shot off into space with the next Voyager probe.
There was the ʻunforgivableʼ waiver move, allowing any team with money in the bank to
claim Ramirez, which no team did. And the traveling secretary incident, where Man-
Ram shoved a guy whoʼs first job was interning for Nebuchadnezzar over free tickets for
his friends.

The climax came in with MANNYWOOD, his trade to the Dodgers. Ramirez
caught fire, leading them to the NLCS against the Philadelphia Phillies. He signed
another gigantic contract, but upon the opening of the 2009 season, was suspended 50
games for testing positive for a womenʼs fertility drug.

I was floored. My favorite player, within less than a year, had been traded,
resigned, then ousted as the very thing I hated the most in Professional Baseball - a
cheat. I have chastised the Bondses, the McGwires, the Giambis. Those that took the
easy way out. Most of them were pure low ball hitters that took steroids to improve that
low ball hitting. Bonds was the hiccup until then. Bonds could cover the entire strike
zone, even beyond. The steroids simply made that coverage even more lethal. Ramirez
joined that group. Ramirez didnʼt need steroids, or whatever additive he was taking. He
was better than that. His swing was fluid, his eye nearly perfect. His game day work was
supposedly top notch, according to all sources. When his head was in the game (and
that was more often than people will ever give him credit for) there wasn't a major
leaguer active that could best him at the plate.

That bring us to these events. A second positive test? How. How could he be so
foolish? So cocky? So arrogant? Did he think he wouldnʼt be caught?

Ramirez has always been cocky. Heʼs always had that breath of supremacy
around him. You could see it in his plate appearances. The way the bat would explode
off his hands after he would hit a mammoth home run. The way he would grimace after
any unfavorable call. He thought he was better than almost anyone in the game. But it
looked like he was right. So that behavior went accepted, at least by a majority of
baseball. Plenty of fans chided his antics, but what could you do? The dude murdered
baseballs. End of story.

Ramirez getting hit with this second positive test is huge. Itʼs like finding out that
KISS wrote ʻDark Side of the Moonʼ and ʻThe White Albumʼ. Itʼs like finding out that
Henry Hill is the original James Frey. Itʼs your father leading a double life and having a
daughter with some woman on the outskirts of town and buying her a pony when all you
got was a Donatello action figure, universally the least liked Ninja Turtle. Itʼs earth
shattering. It completely ruins his entire legacy. When did it start? That first full year with
the Dodgers? No way. The dude hit over .500 in that playoff stretch which was
terminated by the Phils, and close to .400 after the trade. He was most likely on an
Ultimate Warrior style regiment of steroids. Those years in Boston? Tainted without a
doubt. The legacy he and Ortiz carved out for themselves as the Butch Cassidy and The
Sundance Kid in that middle part of the last decade is now voided. The real crime of the
steroid era is perfectly illustrated in Ramirezʼs tale. It wasnʼt so bad that guys like David
Segui and Todd Pratt were using steroids. Even guys like Jason Giambi would have
been eventually forgotten by the mainstream baseball press, like a modern day Dave
Kingman. But Manny Ramirez was supposed to be different. He should have gone
down as one of the greatest hitters for one of the greatest teams in Baseball Lore. An
essential, keystone piece in a team which would be forever remembered in the hearts
and minds of Major League Baseball fans until the end of time. Instead, he will be
remembered simply as a coward. A cheat. A fraud.
Posted by BL Chris at 8:15 AM