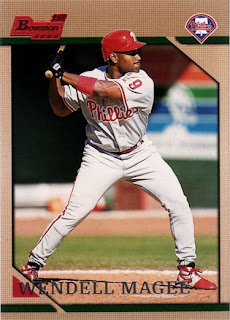 Quick shout out to Joey Ballgame for the suggestion!

About Wendell Magee: Five-tool player. It is a term that makes scouts and front offices drool. If you are not familiar with the term, there are five tools taken into consideration when a young prospect is being looked at. They are the ability to hit for average, power, speed/baserunning, fielding, and throwing. A "five-tool" player is thus one who is considered to be adept in every category. When the Major League Baseball Draft rolls around every year, many such players are selected in the early rounds. Some get selected ahead of players with better credentials based on the belief that their athleticism will allow them to develop into stars as they mature. Sure enough, these projections can be spot on and the rewards are reaped for years. But as often as we see big hits, we also see our share of swings and misses. One such miss was Wendell Magee, Jr., a physically gifted outfielder who the Phillies hoped was the heir apparent to Lenny Dykstra in center field, but could never quite figure out big league pitching enough to become an everyday player.

Cut from his high school baseball team three times, Wendell Magee finally made the squad his senior year and went on to play at Samford University, where he was also a tight end on their football team. His pro baseball journey began in 1994, when the Phillies selected him in the 12th round of that year's Draft. Magee spent the '94 season with the organization's short-season 'A' affiliate in Batavia, where he hit .279 with 12 doubles and 10 stolen bases in 63 games. That performance was good enough for Magee to be moved up to high 'A' Clearwater in 1995. He would have a breakthrough season there, tearing up Florida State League pitching to the tune of a .353 average with 24 doubles, five triples, and six home runs in 96 games. Later in the season, Magee was promoted to AA Reading, where he hit .294 in 39 games. It looked as though the Phillies had gotten themselves a steal in Magee, who returned to Reading for the start of the 1996 season and hit .293 in 71 games before moving up to AAA Scranton/Wilkes-Barre and hitting .284 with 10 homers in 44 games. At the Major League level, the Phillies were floundering through a miserable '96 campaign that had seen Lenny Dykstra go down with what turned out to be a career-ending back injury. Though Magee had rapidly risen through the farm system, the organization knew he was still raw and it would likely be at least another year before he was ready for the Major Leagues. Desperate times can often cause desperate measures, however. With their season a lost cause and without any viable alternatives, the Phillies reluctantly gave Magee the call to join the parent club on August 16, 1996.

Wendell Magee's MLB debut came on the same day as his callup, striking out as a pinch-hitter during a 6-4 loss to the San Francisco Giants at Veterans Stadium. He would get his first start the next night and also collected an RBI double for his first career hit before picking up two more hits the next day after subbing for an injured Ricky Otero. In a 3-1 win over the Dodgers in Los Angeles on August 20, Magee recorded his second consecutive multi-hit game and preserved the victory with two outs in the ninth when he went over the center field wall to rob Tim Wallach of a game-tying two-run home run. It was an auspicious start to Magee's career to be sure, but it didn't take long for some growing pains to set in. Though he excelled in the field (including another leaping grab on Wallach to take away extra bases at the Vet on September 1, a game in which Magee also hit his first career homer), Magee was overmatched offensively and hit just .204 in 38 games.

In an ideal situation, Magee would've started the 1997 season getting some more seasoning back at Scranton/Wilkes-Barre, but Lenny Dykstra's back prevented that from happening. Again lacking alternative solutions, the "Center Fielder of the Future" came north with the Phillies as the '97 campaign got underway. The results weren't pretty, as Magee was eaten alive by big league breaking balls and hit .200 in 38 games. Realizing it was doing him more harm than good to struggle with the big club like he was, the Phillies sent Magee back to Scranton/Wilkes-Barre on May 22. He would spend the remainder of the '97 season there, hitting .245 in 83 games and wasn't recalled when MLB rosters expanded in September.

By the time the Spring Training rolled around in 1998, Doug Glanville had been acquired from the Chicago Cubs to patrol center field for the Phillies. Dykstra briefly attempted a comeback that spring, but his playing days had passed him by and The Dude officially called it a career after the '98 season. Magee had gone from "Center Fielder of the Future" to organizational depth and headed back to Scranton/Wilkes-Barre. To his credit, Magee had a strong season in AAA, hitting .290 with 30 doubles and 20 home runs for the Red Barons. When Gregg Jefferies cleared waivers and was traded to the Anaheim Angels on August 28, Magee rejoined the Phillies and homered against the Giants at 3Com Park in his first at-bat the following day. He'd get the majority of starts in left field the rest of the way and hit .293 in 20 games. In the offseason, the Phils acquired Ron Gant from the St. Louis Cardinals to play left and Magee was again relegated to AAA in 1999. He'd hit .283 with 34 doubles and 20 home runs in 142 games for Scranton/Wilkes-Barre in '99. That earned Magee a September callup to the parent club, where he appeared in 12 games, collecting five hits in 14 at-bats in what turned out to be his final season with the Phillies.

Magee was still a member of the Phillies organization when Spring Training began in 2000, but it had become evident by then that he was no longer in the club's plans. On March 10, 2000, Magee was traded to the Detroit Tigers for Bobby Sismondo, a lefthanded pitcher who would never make it higher than AA ball. Magee would appear in 91 games for the Tigers in 2000, hitting .274 with seven home runs. After hitting just .213 in 90 games the following season, Magee rebounded in 2002, hitting .271 with 19 doubles and six homers in a career-high 97 games, though his final campaign in Detroit was cut short in early September after having surgery to remove bone spurs in his right big toe. He would join the Cleveland Indians on a minor league deal for 2003, but late in Spring Training was traded back to the Phillies for pitcher Mark Fyhrie. Magee hit .333 in 25 games for Scranton/Wilkes-Barre, but asked for and was given his release on April 30. He would spend some time back in the Tigers organization before finishing the season in the minors for the Colorado Rockies. Magee did not make an MLB appearance in '03, which turned out to be his last year of affiliated ball. His pro career ended after spending 2004 and the early part of 2005 with the Long Island Ducks of the independent Atlantic League.

Personal Recollection: When I first heard about Wendell Magee, it was probably sometime late in the 1995 season or early in 1996. Scott Rolen had been the crown jewel of the farm system, but Magee was slowly generating some press as well. As you can guess, the main word with Magee was "tools" and how we were looking at a potential superstar if he was given adequate time to develop. You could see right away that Magee could run, field, and throw. Hitting was another story, as it didn't seem like he could hit anything other than a fastball. The Phillies admitted they rushed Magee to the big leagues and it did hurt his offensive development. We'll never know how he would've turned out had he been given the extra year in the minors that the organization had hoped he'd get.

The catch Magee made on Tim Wallach's deep drive to save the game in Los Angeles was one of the better ones I've seen by a Phillie given the situation. Ricky Bottalico was pitching and his reaction was priceless. I believe he's even brought it up on Comcast SportsNet a few times. If anyone out there has footage of Magee's catch, please don't hesitate to pass it along. I was at the game at the Vet when Magee made a leaping grab at the wall in center to take extra bases away from Wallach late in a tie game that the Phillies went on to win. I remember thinking "if this guy can ever figure out how to hit a breaking ball..." I'm sure Wallach had some different thoughts. Magee had a few other nice plays in the field before the '96 season ended and I remember after one of them Harry Kalas remarked, "Time and time again this young man has saved the Phillies with OUT-standing defensive plays!"

When Magee was recalled late in the 1998 season, it looked as though the time back in the minors had really helped. I thought maybe he could be useful as a reserve, but I guess the organization figured he was what he was by that point and would be best served getting a fresh start elsewhere. Magee did have a couple decent years with the Tigers, but was never able to latch on anywhere else after 2003 even though he wasn't all that old.

I also remember the confusion among fans when Dan Baker would include the "Junior" part of Magee's name when introducing him. Everyone wondered who his dad played for. Wendell Magee, Sr. never played pro ball, but his son chose to honor him by having the suffix included in his name. Nice gesture.

That's my story on Wendell Magee, Jr. Feel free to share your own recollections.
Posted by Ricky Jordan Fan Club at 3:03 PM