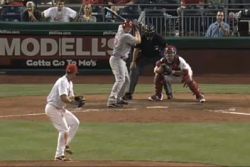 Congratulations to Wilson Valdez, who, on May 26, 2011, became the answer to a trivia question.

There had been an air of excitement in the park -- it was, afterall, a Halladay.  The fan favorite and Cy Young winner was starting the game with the usual suspects -- JRoll,
Howard, Polly, Raul, Wilson, Francisco, Mayberry and Chooch,   The team was playing sans Utley (another crowd favorite), who returned to the line-up 48 hours earlier after a
long stint rehabbing a knee injury.  Chase eventually appeared at the plate to pinch hit, however, the Reds walked him.  Intentionally.  Boo.

On this night, the fans saw the Phillies take a 3-0 lead that was eventually tied.  In the 10th inning, Jay Bruce homered allowing the Reds to take a 4-3 lead.  Not to be outdone, one Mr. Ryan Howard took to the plate and hit a homerun that hit the stairs in the bullpen.

Nothing really happened until the 19th inning.  There was the 14th inning stretch (twice).  The bullpen emptied out and both teams ran out of pitchers.  Baez pitched five scoreless innings.

At the beginning of the 19th inning, Dan Baker announced changes for the Phillies:

Number 51, catcher Carlos Ruiz, was moving to third base.

Number 27, third baseman Placido Polanco, was moving to second base.

Yes, Wilson was pitching.  The move left a lot of fans scratching their heads, but Wilson garnered a standing ovation and chant from the fans, who were quickly impressed with his first pitch -- an 89 mph fastball.  Wilson’s inning as a pitcher can be summed up quickly:  the Reds didn’t score and former Phillies third baseman Scott Rolen was hit by a pitch.  Rolen went 0-7 that night and it seemed the boo’ing from the crowd got louder with each plate appearance.

The game ended in the bottom of the 19th inning with a walk-off sac fly by Raul that brought JRoll home.

Wilson Valdez earned the win.  This game has forever cemented his spot in baseball trivia and has joined him in the ranks of Babe Ruth in additional trivia questions.  Not since Babe Ruth did in October 1921 has another player started in the field and earned a win as a pitcher.
by: Shannon McGinley