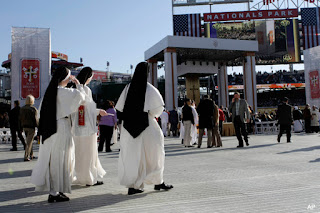 If you’ve never seen a nun scream and yell, or come as close to cursing as possible without quite crossing that line, you’ve probably never seen her at a baseball game.

Sisters’ passion for root, root, rooting for the home team is as American as the sport itself. Whether they’re baking cookies to raise players’ spirits, like the Sisters of the Holy Spirit in Cleveland, or taking bus trips with their fellow sisters to cheer on their teams, baseball season is something of a religious experience for nuns across the country.

Sister John Cecilia was no different. A nurse at St. Joseph Villa in Flourtown, Sister John – Aunt Carmella to her family – was a faithful fan of the Phillies. From wearing her Phillies gear over her habit to standing on her seat every time the Phils were at bat (much to the disbelief of people in the seats around her) Sister John was a devoted, passionate fan.
When she wasn’t cheering on the Phils, she was working tirelessly at St. Joseph Villa in Flourtown, a residence for aged and ill nuns. She put her heart at soul into her work, treating everyone as if they were the most special person on the planet.

When she died unexpectedly this year, her dedication to the residents and passion for baseball inspired family friend Chris Nowaczyk to volunteer on the dementia floor at St. Joseph, bringing baseball back to those who are unable to go to the game.

Each week will feature a different aspect of baseball, whether it’s a focused exercise of player or stat recollection, or a trip back in time to watch a past game, Chris’ goal is to interact with the nuns at St. Joseph using a common passion – baseball.

Although it started as a project designed to honor the memory of his family friend Sister John Ceclia, Chris would like others to become involved, volunteering at St. Joseph or doing something simple such as making a donation to purchase equipment like a television and a projector to help in making presentations.

If you would like to volunteer or make a donation, please email Chris at DrunkPhilsFans@gmail.com
Posted by BL Chris at 5:34 PM